In broad terms, "earth resistance" is defined as resistance of soil observed in the path of flow of electric current. In general, Earth is relatively poor conductor of the electricity in comparison to normal conductors such as copper wire. Resistance can be very low when area of the path where current is flowing is larger in size. Hence in this condition Earth is considered as good conductor.

It is important to know earth resistance as it helps in finding the location which is ideal to ground the equipments and help to protect human beings. It also helps to determine what lies at few distance below the earth's surface.

The Earth ground resistance testing will help find the best earth location and depth to fix low resistance electrodes. The resistivity of earth is used to indicate degree of corrosion useful in underground pipelines. These pipelines are used for oil, water, gas etc. Typically, locations with low resistivity values will have higher corrosion.

In ground resistance testing, earth tester generates AC signal. This signal is fed to the SUT (System Under Test). By measuring flow of current and generated voltage will give us system resistance. The earth resistance can be measured in the range between 0.001 to 20 KOhm. 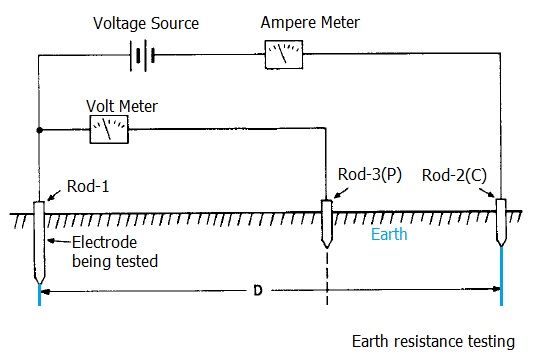