Difference between Microphone and Loudspeaker | microphone vs loudspeaker 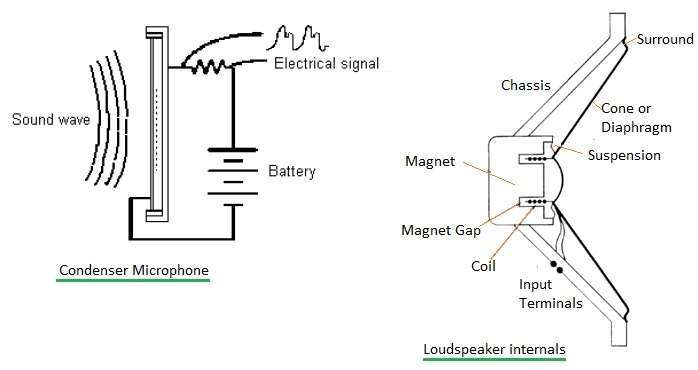 It is basically a instrument meant for the conversion of sound waves into equivalent electrical waves. Figure depicts input is acoustic waves and output is taken using two electrical wires.

There are various types of microphone based on their construction and working operation. The same have been explained below.

Crystal Microphone:
In this type, electrical signals are produced by application of variable pressure developed by sound waves on pair of surfaces of quartz crystal. It works based on piezo electric effect. It is preferred in sound recording system. Crystal microphone which is used in front of speaker's mouth is known as lips microphone. Crystal microphone which is used on speaker's neck or chest is known as Cardiod microphone.

carbon Microphone:
This carbon microphone consists of two metal plates which are separated by granules of carbon. From the two plates one plate is thin and will face the speaker. This plate acts as diaphragm. When sound waves are applied on the diaphragm, it causes the diaphragm to vibrate. This generates varying pressure on carbon granules kept in between. This will change the electrical resistance between two plates and consecutively output electrical current vary accordingly. The carbon microphone is preferred in public address system.

Capacitor Microphone:
The charging and discharging currents of a capacitor are converted into AC signals. This is done by varying the capacity of a capacitor by applying sound waves.

The ribbon microphone is velocity operated microphone in which sound can enter from either of its two sides.

A speaker takes the electrical signal as input and translates it back into physical vibrations to create sound waves. It is known as electromechanical device. It is use for numerous applications such as hearing aids, air raid sirens, public address systems etc.

There are two main types of loudspeakers viz. moving coil type, electrostatic type, ribbon type etc. It can be wired or wireless (i.e. bluetooth) in nature based on its connection with transmission medium.

Loudspeakers are used along with enclosures which are used to reduce free-cone problems of cancellation and resonance. Enclosures will prevent sound waves emitted from rear to mix with the sound wave emitted from front. If not, 180 degree out of phase component of rear waveform will cancel front waveform component. This effect is more prevalent at low frequencies.

Difference between microphone and loudspeaker or speaker