As Antenna resides between cable/waveguide and the medium air, the main function of antenna is to match impedance of the medium with the cable/waveguide impedance. Hence antenna is impedance transforming device. The second and most important function of antenna is to radiate the energy in the desired direction and suppress in the unwanted direction. This basically is the radiation pattern of the antenna. This radiation pattern is different for different types of antennas. 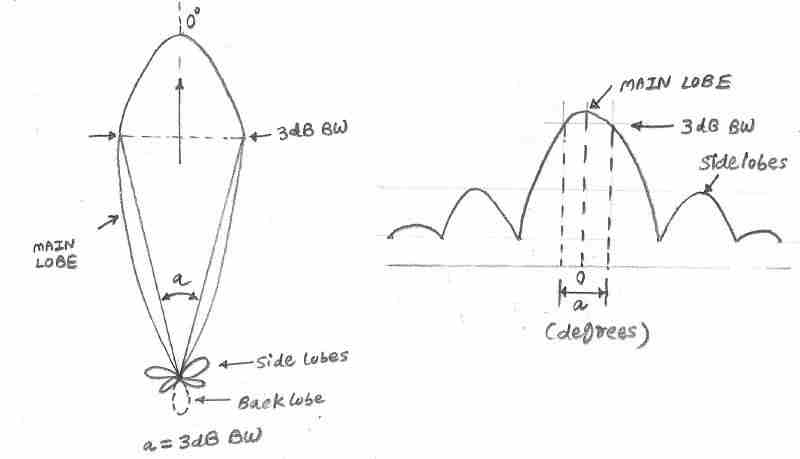 Gain: Antenna gain is the ratio of power radiated in the direction of interest with respect to the power radiated in the same direction by an isotropic antenna. In other terms gain is the product of antenna efficiency and antenna directivity.
Squint: Main beam of radiation pattern is shifted from its normal position that shift is called squint (degree of shift).
Bore sight: The direction of maximum gain.
Polarization: It is defined in terms of the direction in space of electric field vector.
Elliptical Polarization: The polarization of an electric field which changes in both direction and amplitude synchronously with the radio frequency.
Circular Polarization: A special case of elliptical polarization in which the amplitude is constant and the direction rotates synchronously with the radio frequency.
Linear Polarization: The polarization of an electric field whose amplitude changes at the radio frequency rate and whose direction remains fixed.
Beam width: The angle between half power points on the major lobe corresponding to maximum gain, usually in the principal plane.
G/T: Ratio of antenna gain to receiving system noise temperature. It is called figure of merit.
Cross polarization: The component of the electric field normal to the desired polarization.
Sensitivity: The minimum level of the signal antenna can receive is called it's sensitivity.
Efficiency: Ratio of total power radiated by antenna to the input power of antenna.
Directivity: It is the ability of an antenna to focus energy in a particular direction when transmitting or to receive energy better from a particular direction when receiving.

An antenna has a radiation pattern that is a function of the relative angle between the test and source antennas. When an antenna radiates more energy in one direction than another, it is said to have gain in that direction. To measure radiation properties of a highly directional horn antenna, we place a source antenna a certain distance away from a test antenna and measure the signal transmission level as the test antenna is rotated.

Visit vendors section of our website for antenna manufacturers/suppliers.READ MORE.