PDH vs SDH | Difference between PDH and SDH

Both PDH and SDH are terminologies associated with digital multiplexers used in exchanges. The different hierarchies having different bit rates are combined. These hierarchies will comprised of many such bit streams/channels (either 24,30 or multiples) often called as tributaries.

In PDH, digital multiplexer's inputs(bit streams) are of same bit rate and are derived from different clocks from different oscillators. Each will differ within tolerance of few clock periods. Hence it is called plesiochronous.

Bit Interleaving is used in PDH to combine digital signals. 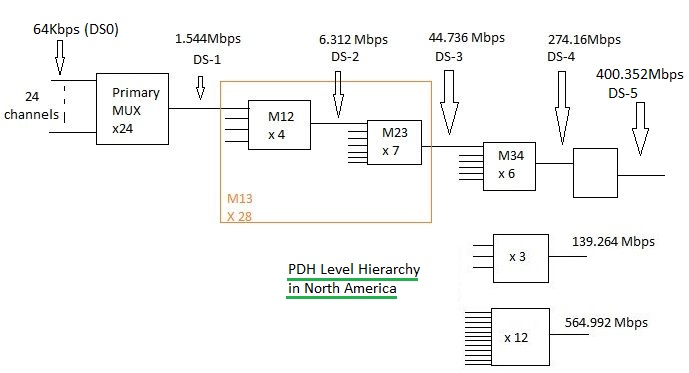 
The table below mentions PDH rates used in Japan.

Following are the limitations of PDH:
•  In PDH, different frame is used for transmission and in data layer. Hence multiplexing and de-multiplexing is very complex.
• Accessing lower tributary requires the whole system to be de-multiplexed.
• The maximum capacity for PDH is 566 Mbps, which is limited in bandwidth.
• Tolerance is allowed in bit rates.
• PDH allows only Point-to-Point configuration.
• PDH does not support Hub.
• Every manufacturer has its own standards; PDH also has different multiplexing hierarchies making it difficult to integrate interconnecting networks together.

As PDH was not scalable to support high capacity bandwidth and hence was not suitable to accomodate growing traffic need. SONET was developed as American Standard while SDH as European Standard.

In SDH, digital multiplexer's inputs are of same bit rate and are derived from common clock, hence are in phase. Hence it is synchronous.

Word(group of bits) Interleaving is used in SDH to combine digital signals. 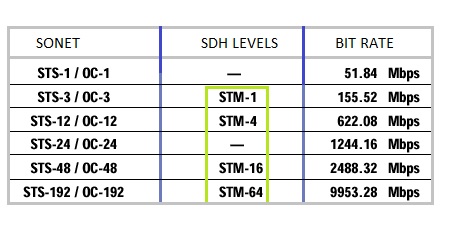 Following are the merits or advantages of SDH:

• A more simplified multiplexing and demultiplexing technique.
• Synchronous networking and SDH supports multipoint networking.
• Capability of transporting existing PDH signals.
•  Easy growth to higher bit rates which enhances the administration and maintenance process.
• It is capable of transporting broadband signals.
• It is multivendor and supports different operators.
• It provides network transport services on LAN such as video conferencing, and interactive multimedia.
• Optical fibre bandwidth can be increased without limit in SDH.
•  Switching protection to traffic is offered by rings.
• SDH allows quick recovery from failure.

PDH vs SDH | Difference between PDH and SDH

Following table compares PDH vs SDH with respect to various parameters and mention difference between PDH and SDH in the form of table below.

Enthusiasts of PDH and SDH can also refer following pages on PDH as well as SDH terminologies. It covers difference between SONET vs SDH, SDH tutorial, PDH and SDH frame structure, SDH modulation, PDH over SONET and so on.