This page describes LTE PCFICH channel with respect to LTE system. The Physical Control Format Indicator Channel (PCFICH) is used at the starting of each 1ms subframe. It provides information about number of symbols used for PDCCH transmission. The signalling values for PCFICH depends upon channel bandwidth. The same is mentioned in the following table-1 for different LTE channel bandwidths. 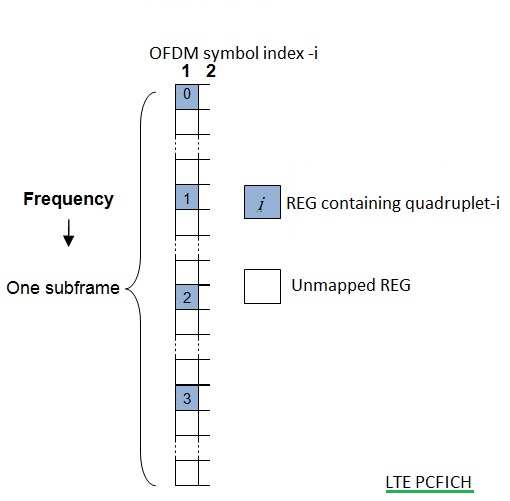 As shown in the figure, LTE PCFICH channel occupies 16 REs(Resource Elements) in first OFDMA symbol of each 1ms frame. PCFICH uses QPSK modulation and hence 16 REs will occupy 32 bits. This 16REs are divided into 4 quadruplets. The position of which in first OFDMA symbol depends on Channel BW and Physical layer cell identity.

As mentioned each quadruplet is mapped to REG(Resource Element Group) with subcarrier index k = k' and is as per following equation.

The rest of three quadruplets are mapped to REGs spaces at intervals of (NDL-RB/2) * (Nsc per RB /2) from the first quadruplet and each other. This way LTE PCFICH channel information is spread across entire subframe as shown.

The PCFICH carries CFI(Control Format Indicator) which has a value ranging from 1 to 3. This CFI is coded to occupy complete PCFICH capacity of 32 bits.

Overhead due to LTE PCFICH channel

Like LTE PBCH, PCFICH also introduces overhead which reduces number of resource elements needed for user plane data. As mentioned in table-2 overhead is less for higher bandwidth and more for extended CP.