Introduction: In wireless system, there are three parts viz. transmitter, receiver and channel. A communication channel that has memory is the one which exhibits mutually dependent signal transmission impairments. Example of channel with memory is channel which exhibit multipath fading.

Errors in bursts are results of channel distortion, channel fading, lightening, switching etc. In memory channel with burst errors, re-arranging symbols can cause bursts of channel errros to be spread in time. The idea behind use of interleaving techniques is to separate codeword symbols in time, such that interleaving times are filled with symbols of other codewords. This codeword symbol separation in time effectively transforms channel with memory into memoryless channel. Hence the system can combat random independent errors.

It separates the codeword symbols in time. It transforms channel with memory to memoryless channel. It enables random error correcting codes in a burst noise channel.

Interleaving is applied to coded message before transmission and deinterleaving after reception. The burst of errors is spread out in time and are handled by decoder. 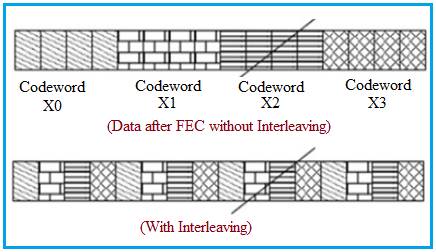 There are three types of interleavers used in communications viz. Block, Convolutional and Pseudorandom.

A block interleaver accepts coded symbols in blocks from encoder, shuffles the symbols and then feeds the rearranged symbols to the data modulator.

The shuffling of block is accomplished by filling the columns of an M- row by N - column ( M X N) array with encoded sequence.

After the array is filled, these symbols are fed to the modulator one row at a time and transmitted over the channel.

At the receiver, the deinterleaver performs inverse operation, the symbols are entered by rows and removed one column at a time. 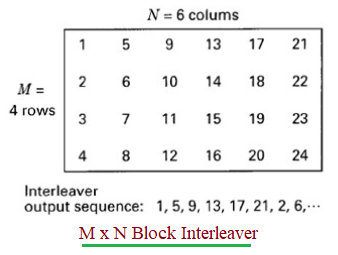 Example : As shown, 24 code symbols are place into the interleaver input. The output sequence to the transmitter consists of code symbols removed from array by rows. 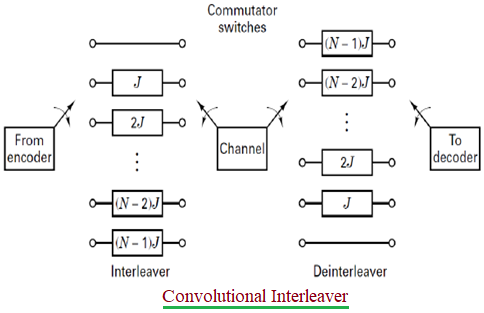 The performance of convolutional interleaver is similar to block interleaver.


Also refer benefits or advantages of interleaving in data communication.

MATLAB code of Interleaver and Deinterleaver

Following is the MATLAB code of interleaving equations mentioned above. This is as per IEEE 802.16 WiMAX OFDM physical layer specifications. For de-interleaver code, visit MATLAB Source code >>.