Capacitance refers to ability of body to store electrical charge. It is expressed by following equation.
C = Q/V,
Where,
Q = Charge on the capacitor
V = Voltage across capacitor 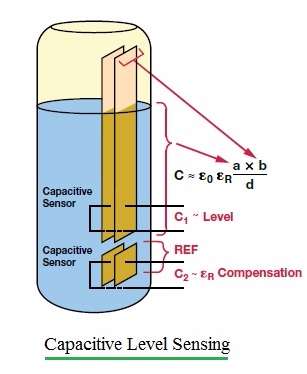 One pair of capacitive sensor (S2) is used as reference. The other plate of sensor (S1) is used to measure it in reference to the first one. As shown in the figure, if the liquid level changes, the amount of dielectric material between plates of S1 changes. This causes the capacitance to vary accordingly.

Due to the fact that εR (Water) is quite greater than εR (Air), the capacitance of sensor can be roughly taken as capacitance of the submerged liquid section. From the fromulas of C1 and C2 of sensors S1 and S2 respectively; level of liquid can be derived as C1/C2 (i.e. ratio of C1 with C2).

The capacitance to digital converters are used to read capacitance and convert it to digital value for further processing or to have any action according to the level i.e. switch off or switch on of the motor.