What is MIPI CSI interface?

It is high speed protocol intended for point to point image and video transmission between cameras and host devices such as PCs, Mobile phones, tablets, laptops etc. It is used for automotive applications too. 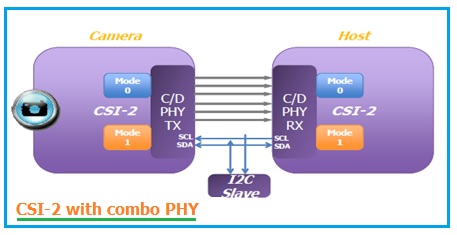 MIPI CSI-1 : It was original MIPI interface for cameras. It defines architectural interface between a camera and a host processor.
MIPI CSI-2 : It stands for Camera Serial Interface second generation. It is the most common interface for mobile applications. It is used to connect smartphone camera modules to an SoC. All the SoCs provide up to 6 serial lanes which can be used to connect one or more cameras. Each of these lane provides bandwidth of up to 300 MB/sec which allows high resolution camera modules to operate at high speed.
MIPI CSI-3 : It uses 32 virtual channels and packet based transmission. It supports in-band interrupts. It offers signalling rate up to 5.8 Gb/s per lane. It is backward compatible with earlier versions of MIPI CSI-2 interface.

Benefits or advantages of CSI interface

Drawbacks or disadvantages of CSI interface

Following are the drawbacks or disadvantages of CSI interface:
➨MIPI CSI-2 supports cable length of less than 30 cm which is less compare to USB 2.0 (< 5 meters) and USB 3.0 (< 5 meters).
➨Plug and play is not supported in MIPI CSI-2 interface unlike USB interface.
➨Cost of manufacturing is medium to high. USB manufacturing cost is low compare to CSI interface.
➨It is essential to have driver for the targeted camera/SoC otherwise extra development efforts are required to develop the driver and software protocol stack. This will be time consuming and expensive.

Advantages and Disadvantages of other Sensor Types