There are basically two types of image sensors namely CCD and CMOS based. CCD stands for charge coupled device and CMOS stands for complementary metal oxide semiconductor. These two are different technologies used to capture images in digital form. Both these methods have their own merits and demerits and are used for different unique applications. Let us understand similarities and difference between CCD image sensor and CMOS image sensor based on how these technologies works.

Both the image sensors depend on photo-electric effect in order to create the electrical signal from the received light. Both types of image sensors convert light into electric charge. Later the same charge is processed into electronic signals. 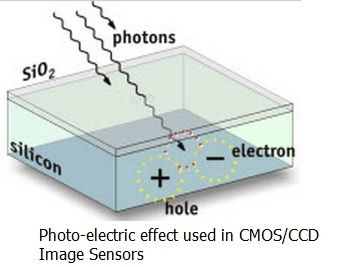 In a CCD image sensor, charge of every pixel is transferred through limited number of output nodes. This charge is later converted to the volatage which is buffered and transmitted from the chip as analog signal. Number of nodes can often be only one. All the pixels in CCD image sensor are dedicated to light capture and uniformity of output is very high.

In a CMOS image sensor, each of the pixels have their own charge to voltage conversion functionality. Often sensors come with amplifier devices, noise correction & digitization circuits. Due to this, this type of chip will deliver digital bits.