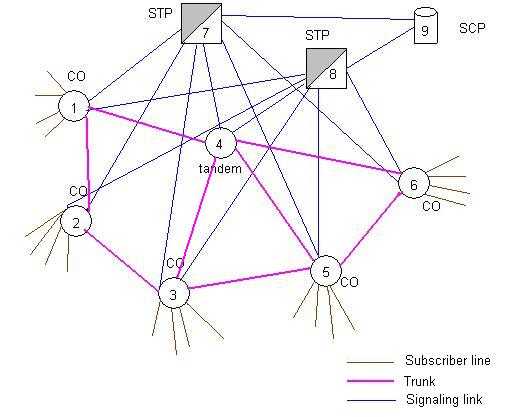 - Let us assume that a subscriber in exchange 1 dials a number 1-600-111-123. 1-600 numbers are virtual numbers; they will be mapped to real numbers available and existing.
- When Exchange 1 receives the dialed digits, it decides to send a message to the SCP.
- SCP is the database as mentioned which contains the information as to which number the call should be routed to.
- So the SCP-9 sends a response to 1 through 7 telling 1 to establish a call to 422-4444 which is the actual number that 1-600-111-123 points to.

The main task of carrying traffic is divided into mainly into four phases i.e. idle phase, connection set up phase, transfer phase and release phase. To make connection setup successful, network should have following.
-Identifying off-hook signal from calling party.
-Send calling subscriber dial tone, which indicates that telephone number can be dialed as the line is healthy.
-Receiving the digits of called subscriber.

Information which need to be transmitted by layer-2/level-2 is framed as SU(signal unit). SU follows HDLC frame format as mentioned above. There are three SU types.
MSU- Message Signal Unit, transfers information provided by UP via signalling network level at layer3.
LSSU- Link Status Signal Unit, performs initialization of link and flow control.
FISU- Fill in Signal Unit, used for alignment maintenance when no signal traffic.