Transmitter vs Receiver-difference between transmitter and receiver types

Transmitter definition: The device used to transmit signal from one place to the other is known as transmitter. The signal consists of information in the form of voice, video or data. It uses antenna to transmit the signal into the air.

After the transmit signal goes through certain distance it gets attenuated and impaired due to channel characteristics. This signal is being received at the receiver. 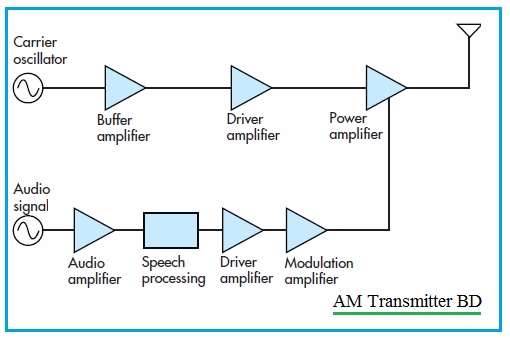 The figure-1 depicts typical block diagram of AM transmitter system. AM radio system uses 540 to 1700 KHz frequency range with IF of about 455 KHz. The frequencies are spaced at 10 KHz intervals. 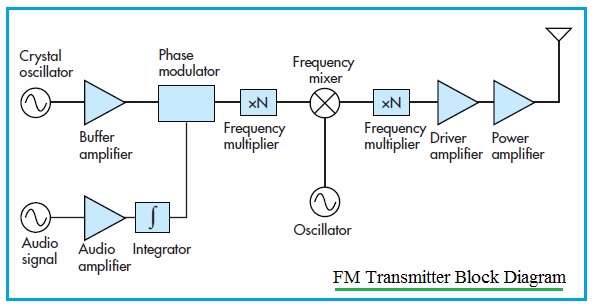 Let us understand working operation of direct conversion transmitter. The signal constellation obtained using this transmitter type is known as QPSK i.e. Quadrature Phase Shift Keying.
• First digital data to be transmitted is splitted into I and Q signals.
• The I and Q signals are passed through DACs.
• The output of DACs are fed to mixers via low pass filtering.
• The architecture uses LO (local oscillator). The LO signal is provided 90 degree phase shift to one of the mixer before mixing process.
• The mixed I and Q components are summed up to obtain QPSK modulated signal.
• The QPSK modulated signal is amplified using PA (Power Amplifier) before transmission into the air.

This architecture uses one more mixing component after modulated signal is obtained using direct conversion transmitter. Before and after mixing the signal is band pass filtered. This requires one more LO (Local Oscillator) in the design. Like other transmitter systems, this type also uses PA (Power Amplification) before transmission. AGC is being used to achieve variation in the amplitude of the output signal with the help of gain control. AGC refers to Automatic Gain Control>>.

In this type of transmitter, the received signal after low noise amplification is passed to RF ADC. There are very few components needed in the design of direct RF sampling receiver. Hence it is simple and low cost architecture.