SOAP vs REST | Difference between SOAP and REST Protocols

• SOAP is the short form of Simple Object Access Protocol.
• It uses XML messaging syntax to exchange information among computers via internet.
• SOAP can extend HTTP for XML messaging.
• It provides data transport for web services. It can exchange complete documents or call remote procedure. It can be used to broadcast a message.
• SOAP is platform and language independent.
• SOAP is not tied to any particular transport protocol. Hence SOAP messages can be transported via SMTP, HTTP, FTP, MQSeries or MSMQ. Out of these, HTTP remains the most popular SOAP transport protocol. 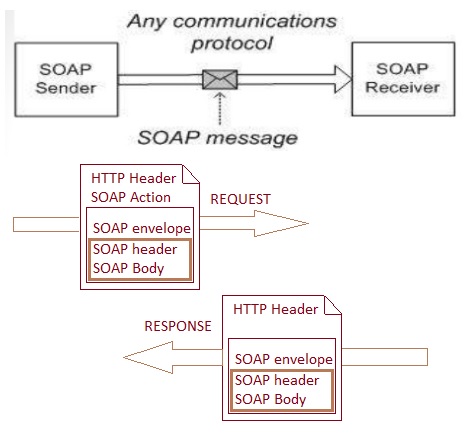 • The figure-1 depicts SOAP protocol messages between sender and receiver.
• As shown SOAP message contains following elements viz. envelope, header, body and fault.
• Envelope: It defines start and end of the message. It is mandatory element.
• Header: It contains any optional attributes of the message used in processing the message, either at intermediate point or at end point. It is optional.
• Body: It contains XML data comprising the message being sent. It is mandatory element.
• Fault: It is optional element which provides information about errors that occur while processing the message.
• SOAP encoding: It includes built-in set of rules for encoding data types. SOAP data types are divided into two broad categories viz. scalar and compound. Scalar types contain exactly one value such as last name, price or product description. Compound types contain multiple values such as PO or stock quote list. Compound types are subdivided into arrays and structs. Scalar types include strings, floats, doubles, integers, date, time, boolean, decimal, binary, long, short, byte etc. 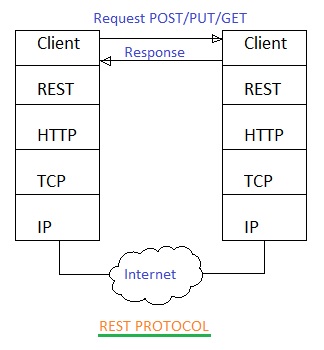 The figure-2 depicts REST protocol stack. REST is the short form of Representational State Transfer. As shown it is built on HTTP/TCP layers. The REST protocol uses bus based architecture, where in no broker component is needed and end devices can communicate directly. In this request and response messages are used between end devices to exchange the information.

Difference between SOAP and REST

Conclusion: From above comparison between SOAP vs REST, we can conclude that SOAP is protocol and REST is architectural style. REST API utilizes SOAP protocol similar to its use of HTTP protocol.

What is difference between