The device antenna tuner is connected between antenna and transceiver or transmitter or receiver. It matches impedance of transceiver with the impedance of the antenna. Hence it minimizes any mismatches which results into proper transmission and reception of the EM signal.

An antenna tuner is simply network of variable inductors (coils, L) and capacitors (C). By adjusting L and C, effects of inductive and capacitive reactances can be canceled. Once the reactances are canceled, antenna impedance is matched to impedance of transceiver (i.e. usually 50 Ohm).

There is parameter called SWR (Standing Wave Ratio) which is ratio of reflected wave to forward wave. SWR should be less in order to have ideal transmission or reception with less reflections. Due to tuner, SWR decreases and hence radio unit produces good sound quality due to perfect match between antenna and radio unit connected on feed line.

There are manual and automatic antenna tuners available. Manual requires knob to be tuned manually which varies L and C values. Automatic tunes requires either push of a button which sets L and C according to the frequency at the input from antenna or L/C are set automatically with the sense of received frequency. 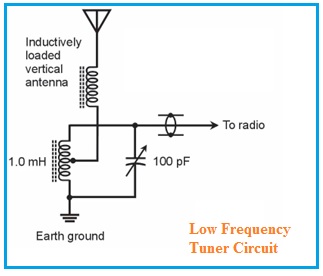 The figure-2 depicts low frequency tuner circuit. It consists of Inductors (L) and Capacitors (C) discrete components which operates at lower frequencies. It uses following equation to determine value of L and C based on frequency to be tuned or received.

The figure-3 depicts different configurations used as tuner. Based on their shape, they are known as L-network, π-network and T network respectively as shown. Inductors and capacitors are arranged as shown in the figure. 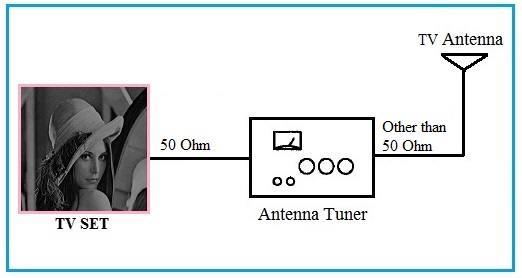 The antenna tuner used for Television is known as TV antenna tuner. It is located between TV set and antenna as shown in the figure-4 above. TV antenna unit is designed to pick TV channel frequencies. Like radio, TV antenna tuners are also manual and automatic type.

what is difference between