This page compares QPSK vs DP-QPSK and mentions difference between QPSK and DP-QPSK modulation types.

The terms QPSK stands for Quadrature Phase Shift Keying and DP-QPSK stands for Dual Polarization Quadrature Phase Shift Keying. Both of these are modulation techniques used to convert bits into symbols. QPSK is widely used as modulation technique in RF and Wireless communication. DP-QPSK is used in optical communication to represent laser output into symbols for transmission in order to reduce the bandwidth in the transmission of information. For example in order to transmit 100 Gbps, we require only about 25 Gsymbols per second. This is due to the fact that DP-QPSK represents 4 bits per symbol. 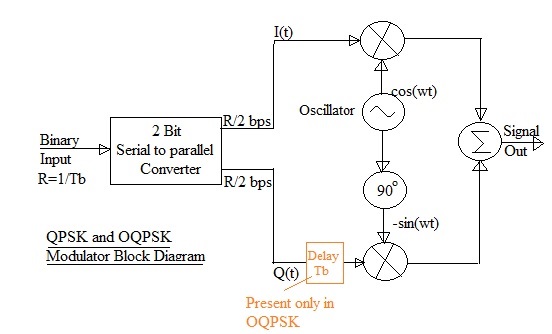 
As shown in the figure-1, QPSK modulator maps 2 bits per symbol.

As shown input binary data is divided into two streams using S/P converter. One stream is known as in-phase (I) and the other stream is known as quadrature phase (Q). LO (Local Oscillator) generates cos(wt) and 90 degree phase shift of this gives sin(wt). I signal is represented by cos(wt) signal while Q signal is represented by sin(wt) signal. Both I signal and Q signal are combined to produce QPSK signal as shown. Hence QPSK signal is formed by both cosine and sine waveforms. Following mathematical equations are useful to understand QPSK modulation technique. 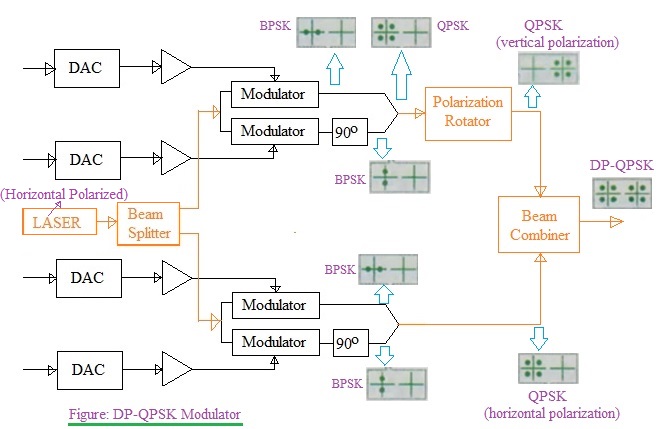 Advantages of DP-QPSK modulation over QPSK

Following are the advantages of DP-QPSK over QPSK are also mentioned.
• The transmission capacity of DP-QPSK per second is double than QPSK as it represents 2 bits more than QPSK per symbol.
• The electronics hardware requirement is cost effective as for 100 Gbps transmission, DP-QPSK modulator requires about 25 GHz processing instead of 100 GHz which is simple and cheaper.