About Plasma:
The plasma is fourth state of matter. It is most common form of matter which is found about 99% of the visible universe. Plasmas carry electric currents and generate magnetic fields. The cold plasma is used for antenna applications. Plasma consists of collection of free moving electrons and ions (i.e. atoms which have lost electrons).

About Plasma Antenna:
• An RF Antenna which uses plasma element instead of metal conductor is known as Plasma Antenna.
• The plasma antenna uses ionized gas enclosed in tube enclosure as conducting element.
• When the gas is electrically charged or ionized to plasma state, it becomes conductive. This allows RF signals to be transmitted or received.
• Ionized gas is very efficient conducting element with many benefits. 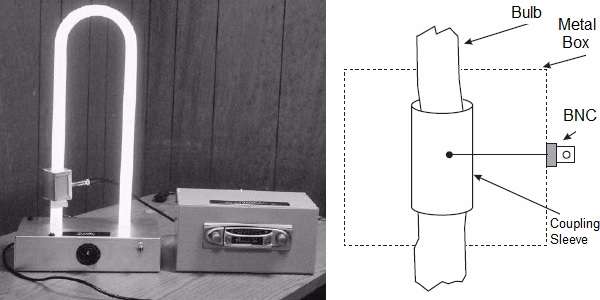 There are different methods to design a plasma antenna. One such design is depicted in the figure-1. This antenna acts as a receiver for FM radio operating in the 88 to 108 MHz band. It consists of standard U-shaped lamp and ballast. The variable voltage transformer is used to control plasma current and density. Small box size capacitive coupler is used surrounding the lamp. Capacitive coupler is connected with FM receiver using coaxial cable as shown.

The plasma which is inside the fluorescent lamp functions as antenna similar to the same size wire. The metal sleeve surrounding the lamp tube provides RF coupling for FM signal from plasma column to coaxial cable to reach FM receiver box. When AC power is switched ON, lamp will be turned ON and FM radio can be listened when it is tuned. When AC power is switched OFF, antenna gets de-activated and hence FM station can not be heard.

Following points summarize benefits/advantages of Plasma Antenna.
• Increased power can be obtained in plasma antenna.
• It provides enhanced bandwidth.
• It delivers higher efficiency.
• It produces less noise.
• It is smaller in size.
• It is lower in weight.