Alliance of more than 300 companies from 34 countries have agreed on uniform telegram traffic between sensors and actuators in a bus system. From this, the EIB(European Installation Bus) has been developed.

KNX system consists of sensors and actuators. Retransmitter device is used for bigger installations. Both bidirectional and unidirectional implementations are possible in KNX system. The system provides two types of addressing schemes which are used for communication.

In powerline, 48 bit domain address is added to each message.


Figure mentions KNX frame structure as per IEC870-5-2(FT3). As mentioned it consists of preamble at the start and postamble at the end. Each block of data is appended with CRC for error detection. Both preamble and postamble is used for synchronization purpose. Block1 = { Length(1byte), C-field(1byte), ESC(1byte), Ctrl(1byte),SN(6bytes)}
Length specifies total no. of user bytes counting from C-field
C-field fixed value of 44h
ESC -Escape code to separate KNX from metering
Ctrl-uni or bidirectional sender signal strength battery state
SN-Serial number or domain address of the sender 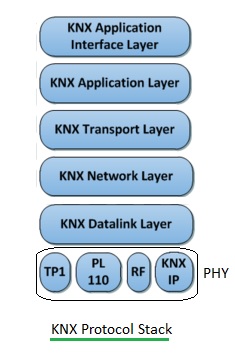 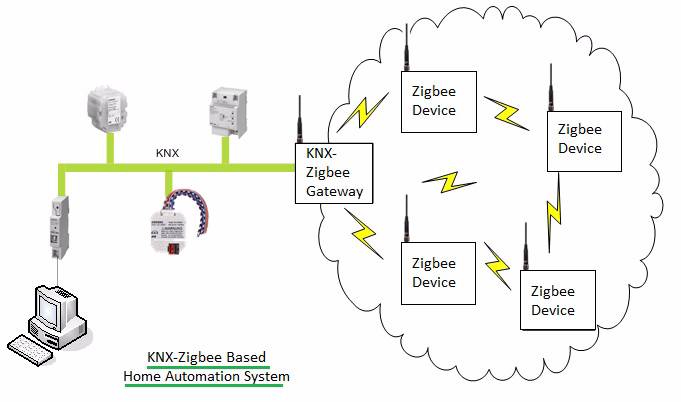 
KNX is widely used in building and home automation to create smart homes and smart city. It has numerous applications for energy efficient networks in schools, houses, buildings and more. Siemens and Schneider Electric are working on many such projects based on KNX technology.

KNX is a mature protocol for wired media and is recognised internationally. To take advantages of wired as well as wireless medium, KNX is used in conjunction with other wireless technologies(zigbee,z-wave etc.) for home automation. Figure depicts one such network using KNX-Zigbee Gateway. This gateway device does protocol conversion from KNX to Zigbee and vice versa. Wired devices of the home is taken care by KNX protocols and wireless devices is taken care by the Zigbee protocols.

what is wlan?
what is router ?
what is wimax?
what is lte?