Basic design approach for up converter and down converter

For Fin as input frequency, FLO as local oscillator input and Fout as output frequency of the RF mixer. They are expressed as follows.
Fout = +/-m*Fin+/-n*FLO
m and n range from 0,1,2,3

The RF mixer produces sum as well as difference of the input frequencies. Appropriate component is filtered out as per requirement in the system as shown. Refer RF Mixer tutorial >> and article on design and development of RF Transceiver >> for more information.

Before we dig into millimeter wave up conversion, let us understand design approach used in C band up converter. The figure-2 depicts basic design of up converter at C band frequency.

The design is based on heterodyne architecture which uses two RF mixers in the chain rather than homodyne where one RF mixer is used. Refer Homodyne vs Heterodyne >> for more information.

➤The first mixer convers IF frequency (52 to 88 MHz) to 1182.5 +/- 18 MHz using Local Oscillator frequency of 1112.5 MHz.
➤The second mixer converts this IF frequency to RF frequency in the range 5925 to 6425 MHz using RF synthesizer of 4680 to 5375 MHz.
➤In between amplifier and attenuator pads (3 dB or 6 dB) are used to meet Output/Input P1dB compression point requirement of mixers and other amplifier devices in the chain.
➤Isolators are used to pass the signal only in forward direction and blocks the signal in the reverse direction.
➤GCN is the "Gain Control Network". It is PIN diodes based attenuator used to vary output power of the up converter. There are digital attenuators available used for the same purpose.
➤RF filters are used at various stages in the up converter chain to filter out desired frequencies and reject the undesired ones. For example at the input LPF is used to pass low frequencies in the range from 52 to 88 MHz. In the center stage after first mixer, BPF of 1182.5+/-18 MHz is used. After the second mixer, BPF of 5925 to 6425 MHz range is used and so on. 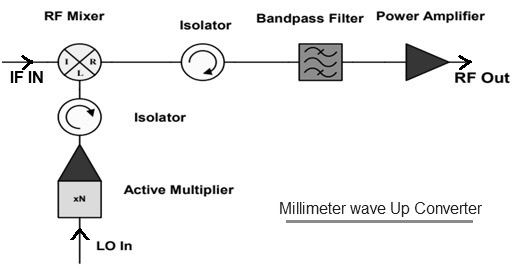 The figure-3 depicts design of millimeter wave up converter. It uses single mixer for RF up conversion. LO frequency is multiplied and passed to the RF mixer as input in order to beat with IF Input. The RF mixer output is passed through the isolator and BPF before being amplified by PA (Power Amplifier). One more isolator is used after the multiplier as shown to avoid any reflection of LO signal back.
Refer application note on 60 GHz transceiver >> designed by Analog Devices Inc. which uses similar design approach.

Let us understand C band down conversion before we dig into design of millimeter wave down converter. The figure-4 depicts basic line diagram of down converter used for C band frequency. The design is based on heterodyne architecture as described above in the up conversion chain. 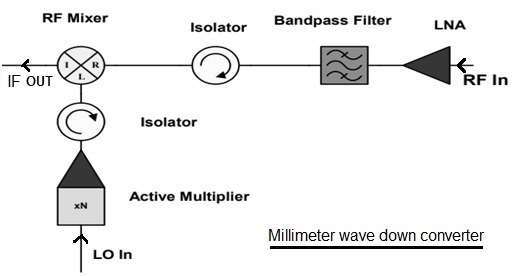