What is cell phone radiation:
The device which helps to make and receive calls over radio link is known as cell phone or mobile phone. This is possible due to availability of different wireless technologies based cellular network viz. 2G, 3G, 4G etc.

There are three major components in a cell phone which includes transmitter, receiver and antenna. The transmitter takes voice as input and converts the same into radio frequency output to interface with cellular base station. The receiver part receives the cellular transmissions and decodes the same to retrieve the voice or data or messages. Cellular towers are deployed through out the city to provide cellular service. Each of these towers radiate frequencies with certain power. Cell phone also need to transmit signal with certain amount of power based on its distance from the base station.

Cell phones emit RF (Radio Frequency) signals in the form of electro-magnetic radiation. The EM waves composed of E field and H field moving at speed of light. Hence EM radiation has effects on the human and environment. Following section mentions most common effects of the cell phone radiation and complaints from the human beings. 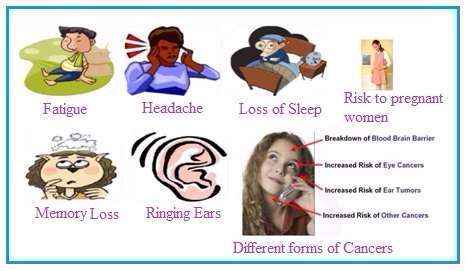 The common effects of cell phone radiation to the environment are as follows.
• Effect on farm animals e.g. cows reduce the milk output due to continuous radiation for more period of time.
• EM radiation from towers and cell phones lead to diseases in plants, animals, insects and birds. This is the reason for vanishing of sparrows, bees, butterflies etc.