As we know antenna radiates EM waves in various directions to certain proportion. This radiation is referred as radiation pattern of the antenna. There are two regions around the antenna viz. near field region (< 3*λ )and far field region (> 3*λ ). Refer near field vs far field➤. Antenna can be tested and various parameters are measured in indoor chamber or in outdoor range facility.

Following are the common antenna measurements tested during antenna testing.
Antenna Gain: It is the factor by which input power to the antenna will be multiplied to provide higher output power.
Antenna Beamwidth: The difference between half power points (3dB points) on antenna radiation pattern is referred as antenna beamwidth. It is measured in degrees.
Antenna G/T: Antenna Gain to Noise temperature ratio is referred as figure of merit of the antenna.
Antenna radiation pattern: Electro-magnetic waves emitted from the antenna is referred as antenna radiation pattern. It is made of a major lobe and more than one side lobes. The region near the antenna is referred as near field region and region far away is referred as far field region. It can be represented either in polar or in rectangular coordinates. This antenna measurement is explained below.
Antenna bandwidth: Range of frequencies over which antenna operates satisfactorily. The difference between highest and lowest frequency points is referred as antenna bandwidth.
Antenna efficiency: It is the ratio of power radiated or power dissipated in the antenna structure to the power input to the antenna.
Antenna impedance: In simple terms, it is the ratio of voltage to the current at the antenna input. If antenna impedance at input is 50 Ohm means sinusoidal voltage amplitude is 1volt and current amplitude is 1/50 Amps.
Antenna effective aperture: This parameter describes how much power can be captured by the antenna.
Refer Antenna terminology >> for more information. 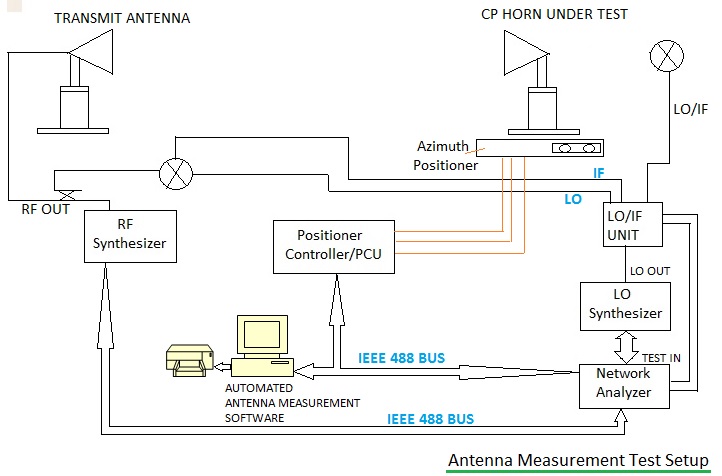 Typical setup for antenna testing used for various antenna measurements is shown in the figure-1 above. The horn antenna is used as standard transmitting antenna. The antenna under test (i.e. AUT) is used as receiving antenna in the setup. The AUT is placed on rotating table or positioner. As mentioned RF synthezier or sweeper is used at transmitter which feeds the signal of desired frequency and power. AUT is rotated in azimuth and elevation and radiation pattern is recorded at the receiver.