The doppler radars are very simple and utilize continuous wave for the transmission. Hence doppler radar is also referred as CW radar. This radar is based on the following principle. The frequency of the returned signal i.e. echo from the fixed target remains same as the transmitted wave while frequency of the returned signal from moving target will be shifted based on doppler frequency. By measuring difference between transmitted and reflected received frequency radar extracts relative velocity of the target.

Because of continuous form of the CW emission, basic doppler radar is not useful for range measurement. This concept is used in the police radar described below for tracking the velocity of the fast moving vehicles. It is used for rate of climb meter and also to measure velocity of the aircraft. 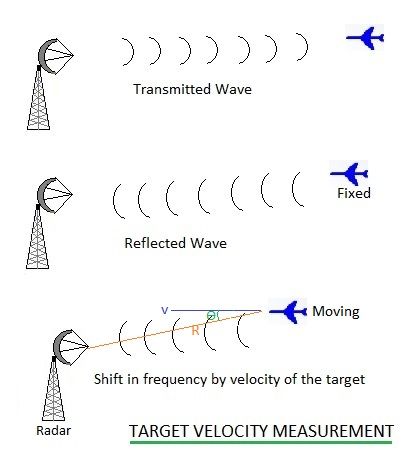 Let us assume that target is moving towards the radar. In this case, distance between radar and target is decreasing and it depends upon the magnitude of the velocity of the moving target. Radar experiences apparent shift in frequency of the returned reflected wave referred as doppler shift. This doppler shift is approximately about order of 1KHz when transmitted wave is in GHz. Based on this change in frequency velocity of the target is determined and its moving direction can also be found. This has been described below with doppler radar equation.

In doppler radar, range rate can be determined by measuring doppler frequency shift and polarity.

Police Radar based on Doppler

The figure-2 depicts the modules used in police radar. It is used to detect and measure velocity of moving vehicles. As shown microwave signal generator is used as transmitter. Here gunn diode based oscillator is used to generate the microwave signal. Microwave signal is transmitted through horn antenna via RF circulator. The portion of transmitted signal leakage is used to compare with the reflected signal. RF Mixer produces sum and difference of these two input signal frequencies. The sum component is ignored and difference component is used which is due to doppler shift. This type of radar is referred as police radar. The doppler frequency after processing is fed to the radar scope or display unit. This display unit provides velocity of the moving vehicle.

Following formula can be used in police radar to calculate velocity of the vehicle.
Velocity (in miles/hour) = 0.26 * (Doppler Shift in Hz)/(Microwave Frequency in GHz)