Introduction:
802.11ax standard is latest in the series of IEEE 802.11 WLAN standards. The 11ax devices are backward compatible with legacy wifi devices as per 11a/g/n/ac standards operating in the same band. Unlike 802.11ac, 802.11ax operates in both 2.4GHz and 5GHz bands.

Increase in WLAN users lead to reduction in data throughput due to packet collisions over the air and shorter free time periods for them to transmit. Moreover closer WLAN APs (or routers) lead to interference specially in the apartment buildings or offices. The previous WLAN standards (802.11g/n/ac) have introduced larger bandwidth, higher modulation scheme and MIMO in order to increase the data throughput. The new features have been introduced in 802.11ax to make existing transmission capacities more efficient. The standard is going to be ratified in the year 2019. 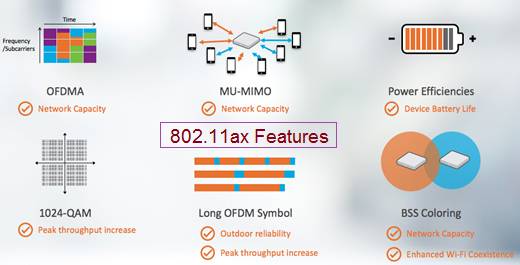 Following are the major changes made in the 802.11ax technology.
➨Guard interval and Symbol duration have been increased by factor of 4 (subcarrier offset is reduced by factor of 4). Hence wifi signal becomes more robust for outdoor applications.
➨1024QAM has been added, hence it helps in achieving higher maximum data rates.
➨Spatial multiplexing is extended to support 8x8 MIMO
➨OFDMA has been introduced in both downlink and uplink to share OFDM subcarriers among multiple users unlike OFDM used in previous standards where in all the subcarriers are allocated for single user. Due to OFDMA, single channel can be shared by multiple users in parallel.
➨MU (Multi-user) MIMO has been added in the uplink also where as in previous standards it was available only in the downlink part. Hence higher throughput is achieved in the uplink through SDM (Spatial Division Multiplexing).
➨Extended range preamble is used in the frame structure.

Following are silent features of 802.11ax Wifi technology which is also known as WiFi-6. 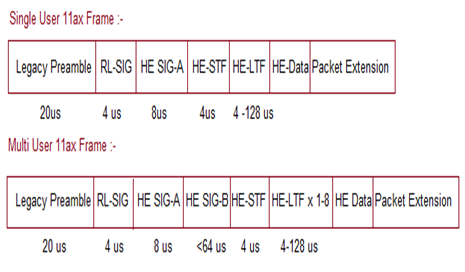 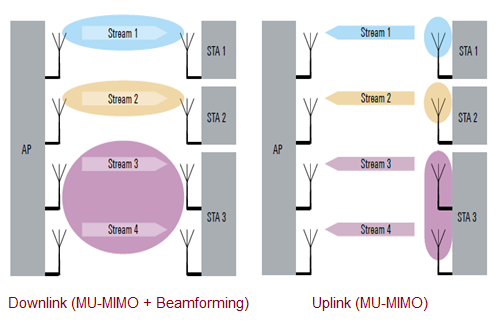 Following are the features introduced in the 802.11ax physical layer. Let us understand PHY features as part of 802.11ax tutorial.
• OFDMA has been introduced in both the downlink and uplink. Hence multiple users can simultaneously transmit and share available bandwidth. Using OFDMA, each user is allotted a portion of spectrum by allocating contiguous set of subcarriers (known as "RU (Resource Unit)" ). In 802.11ax, RU can take up set of subcarriers (min. 26 and max. 996). For 20 MHz bandwidth, there are various RU options available. For example, RU26 allows upto 9 users to transmit simulneously. Similarly for 160 MHz, there are about 74 simultaneous users. Refer RU in 802.11ax >>. 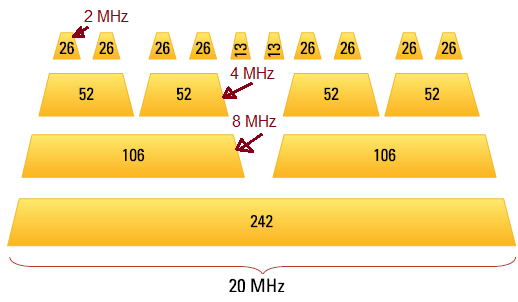 • 1024-QAM modulation scheme has been introduced in addition to BPSK, 16-QAM, 64-QAM and 256-QAM. It helps in increasing data rates.
• The other major change is increase in guard and symbol interval by four times.
• Downlink multi-user MIMO (DL MU-MIMO) has been introduced in 802.11ac itself. The same has been continued and in addition beamforming is added. This helps in directing beam towards each individual users more precisely. This has extended support for parallel data streams from 4 to 8 from previous release of 802.11ac. The figure depicts multi-user MIMO in downlink direction (from AP to Stations(STAs)). 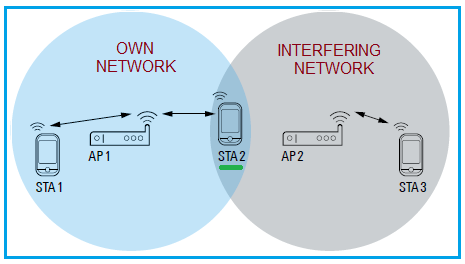 • FEC schemes: IEEE 802.11ax proposes to use LDPC for large bandwidth (i.e. channel bonding) and BCC for narrower bandwidth scenarios. Refer IEEE 802.11ac physical layer >> which describes all the modules except the above enhancements which are introduced in the WLAN 802.11ax physical layer.

• Only one packet type has been used in legacy WLAN standards and there was no distinguing feature to segregate downlink and uplink directions. IEEE 802.11ax introduces four packet types viz. HE_SU, HE_MU, HE_TRIG and HE_EXT_SU. Each of these packets use different preamble followed by payload.
• Single User mode (HE_SU): It is used to establish communication between AP and single user. Both uplink and downlink use the same packet structure. The single user is allocated entire spectrum with maximum size RU. This eliminates overhead usually found in the multi-user mode.
• Multi-User mode (HE_MU): It is used in the downlink direction (from AP to STAs) along with OFDMA. The packet contains HE_SIG_B field which carries information about RU allocation for all the individual users i.e. STATIONs.
• Multi-User uplink (HE_TRIG): All the users (i.e. STAs) transmit simultaneously over uplink using OFDMA technique when they are triggered by AP. In order to avoid collisions, each users are pre-assigned with their share of allocations in the spectrum in units of RUs. Moreover they have been assigned with power levels and how much data to be transported in the packet. To achieve this, AP first send out trigger frame to all the STAs. This trigger frame contains configuration parameters including payload length, BW, RU allocation, modulation mode etc. All the stations start their PPDU transmissions after predefined time interval (i.e. SIFS).
• Extended range PPDU (HE_EXT_SU): This mode is designed for outdoor wifi usage over long distances where poor SNR is usually found. 20 MHz BW is used along with most robust modulation techniques such as BPSK/QPSK. Preamble part in the packet is transmitted with 3 dB higher power compare to rest of the part.

Conclusion: This WLAN 802.11ax tutorial is useful for beginners having knowledge on legacy WLAN standards such as 802.11g/n/ac. Refer Advantages and disadvantages of 802.11ax >> which describes benefits and drawbacks of 802.11ax technology in depth.