Step-1: After being powered on, UE tunes the RF and attempts to measure the wideband received power (RSSI) for specific frequencies (channels as commanded by higher layer) over a set of supported frequency bands one after another and ranks those cells based on signal strength.

Step-2: Then it uses downlink synchronization channels i.e. locally stored P-SS and S-SS to correlate with received one. UE first finds the primary synchronization signal (PSS) which is located in the last OFDM symbol of first time slot of the first and 5th sub-frames This enables UE to be synchronized on sub-frame level.Primary Synchronization Signal helps for Slot Timing Detection and Physical Layer ID (0,1,2) detection.

Step-3:: secondary synchronization symbols are also located in the same sub-frame of P-SS but in the symbol before P-SS. From secondary SS, UE is able to obtain physical layer cell identity group number (0 to 167) It helps for Radio Frame Timing detection, find Physical Layer Cell ID, cyclic prefix length detection, FDD or TDD detection. The same is depicted in the LTE cell search procedure figure below. 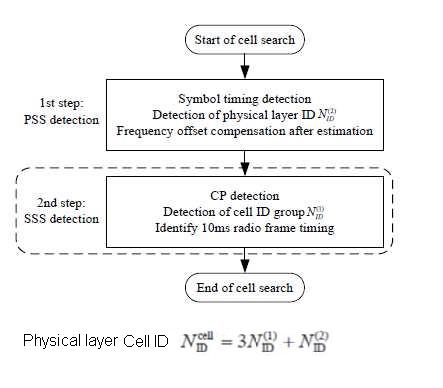 Step-4: Once UE knows the PCI for a given cell, it also knows the location of cell Reference signals - which are used for channel estimation, cell selection / reselection and handover procedures. After channel estimation using RS(reference signal), MMSE equalization is performed to remove the effect of channel impairment from the received symbols.