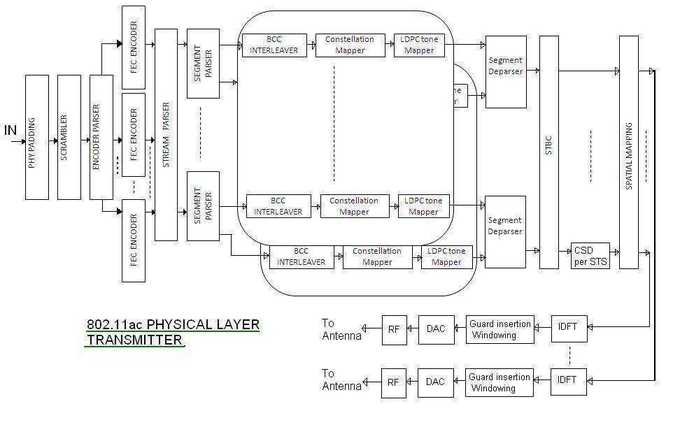 As shown in the figure,11ac transmitter can be used for single user as well as multiple users. Input to this physical layer is MAC frame from MAC layer. We will see how the information flows through 802.11ac physical layer chain below.

PHY padding: First of all service field is formed and added at the start of data field. At this module, padding is added to match length of the frame as required to fill complete symbol boundary.

Scrambling and FEC encoding: Scrambling is constructed using shift registers and EX-OR gates which removes long string of 1's . After this the data is passed through convolutional encoder or LDPC encoder or BCC encoder. To derive higher and different data rates puncturing is performed on encoded data.

Stream parser: It operates on encoder output and divides the encoded bits into multiple streams. Output of stream parser is referred as spatial stream which is fed to the interleaver.

Segment parser: The transmissions of bandwidths 160 MHz and two blocks of 80 MHz will get mapped onto two 80 MHz frequency segments before the interleaving is performed. Segment parsing is not done on 20,40 and 80 MHz bandswidths.

Convolutional code interleaver: During transmission data bits get affected consecutively due to radio channel conditions. To disperse the consecutive bits over different subcarriers interleaving is performed. This makes it easier to correct the bit errors.

Data mapping: BPSK,QPSK,16QAM,64 QAM,256QAM are used for data constellation mapping. For BPSK one bit is mapped on carrier,for QPSK 2 bits are mapped and so on.

LDPC tone mapping: They are mapped to OFDM subcarriers seperated by sufficient gap. It functions same as interleaver. For example, in a 40 MHz case, two constellation points are seperated by about 6 subcarriers.

Segment deparsing: For 160 MHz bandwidth case,segment deparser gets two frequency segments together and makes it favourable for transmission.

Space time block coding: This is optional in the implementation. It converts one stream to be fed to multiple antennas to increase the redundancy. This way spatial streams are transformed into space time streams.

pilot carrier insertion and cyclic shift diversity: Pilot subcarriers are inserted and proper symbol is formed as per the table below based on bandwidth of operation. The pilot subcarriers are used for channel estimation and equalization. Each space time streams have been given different phase shifts so that they are easily identified at the receiver.

Guard insertion and windowing: Guard is inserted at the start of the symbol and the symbol is windowed.This helps in overcome delay spread and useful for limiting the spectrum.

preamble construction and frame formation: VHT preamble is formed and is appended to the frame. Preamble helps in channel estimation and front end synchronization.

ADC and RF Up conversion: Digital data is converted to analog data and applied for RF frequency up conversion.