VRRP vs VRF | Difference between VRRP and VRF

This page compares VRRP vs VRF and mentions difference between VRRP and VRF. VRRP stands for VIRTUAL ROUTER REDUNDANCY PROTOCOL and VRF stands for Virtual Routing Forwarding. It also mentions how VRRP works. 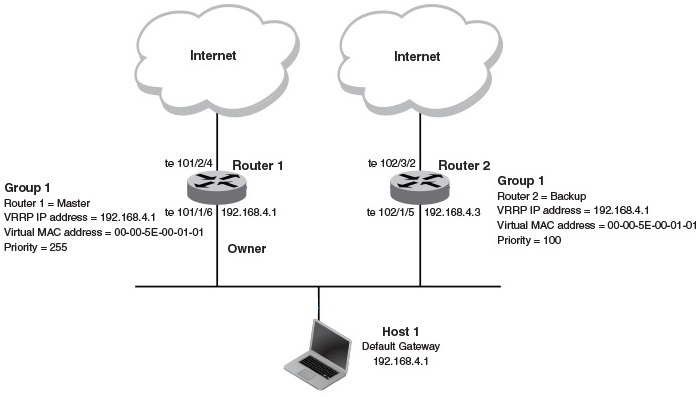 As mentioned VRRP is the short form of Virtual Router Redundancy Protocol. This protocol specifies election protocol which dynamically assigns responsibility to virtual router when another router fails on a LAN. The backup router takes responsiblity of failed master router on LAN. This will help host connected on the same LAN segment to continue use of internet services on the other side of the routers.

In short, VRRP is an election protocol which provides redundancy to the routers installed in a LAN.

Using VRRP protocol, a virtual IP address can be given either manually or using DHCP protocol as default. A virtual IP address is shared among the routers, with one router designed as master router and the others are designed as backup routers. Basically using VRRP, backup router can take over as gateway if master router fails. The VRRP (Virtual Router Redundancy Protocol) has been defined in RFC-2338 and RFC-5798.

Backup router will take over as master due to following conditions:
• The master router goes down due to some problem.
• The network manager either shut down LAN interface or turn OFF master routing switch.

As mentioned VRF is the short form of Virtual Routing and Forwarding. It is IP technology which allows more than one instances of routing tables to co-exist on same router simultaneously. As routing instances are independent of one another, it allows reuse of same or over-lapping IP addresses without any conflicting issues.

As there is one routing table available for each of the VRF instances. Hence VRF capable router functions as group of multiple virtual routers on same physical router.