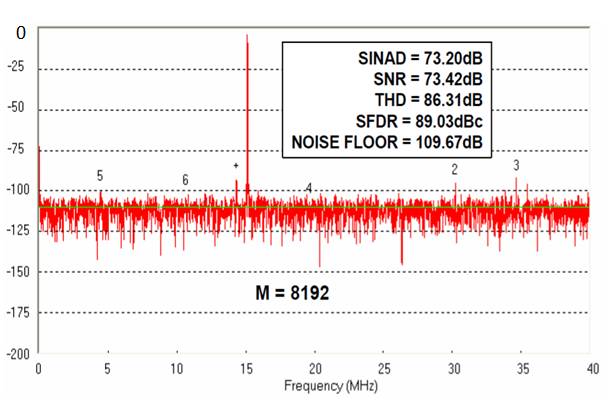 • SNR stands for Signal to Noise Ratio.
• It is the ratio of fundamental signal amplitude to noise signal amplitude.
• The noise includes all non-fundamental spectral components (e.g. spurious, harmonics, image) in the nyquist range (which is from 0 to Fs/2, Where Fs is sampling frequency) without DC component. Fundamental signal and harmonics components are considered for measurement.
• Bandwidth of the signal is considered in SNR calculation.
• SNR is expressed as follows. SNR = 20 * log [ {fundamental}/ SQRT {SUM (SQR([Noise]) } ]

The SNR formula above mentions SNR calculation in terms of ratio of signal(rms) and noise (rms) as well as ratio of power of signal in dB with noise power in dB.

SNR can also be expressed in terms of SINAD and THD values as per equation above.

• THD stands for Total Harmonic Distortion.
• It is the ratio of sum of harmonics to the fundamental signal component. Normally initial 5 to 6 harmomic components are used for characterization. In other words, it is the ratio of rms of fundamental signal to mean of root-sum-square of its harmonics plus all noise components (excluding DC). In FFT case, bandwidth is taken from DC to Fs/2.
• THD can be expressed in dB, dBc or percent.
• THD is used to express effect of the high frequency signal components.
• THD of A/D converter is generally specified with input signal close to full-scale, although it can be specified at any level.
• THD analyzer can also be used for the measurement of THD (Total Harmonic Distortion) which uses FFT method.

The equation above mentions relationship between THD vs SINAD and SNR. It also expresses THD in units of dB.

• SINAD stands for Signal to Noise and Distortion Ratio.
• It's value is approximately equal to THD + noise.
• It is the ratio of signal amplitude (in rms) to sum of other spectral components (in rms). The spectral components include harmonic frequencies but exclude DC component.
• It can be expressed in units of dB and expressed as following equation in terms of power of various signal components.
➤ SINAD = 20 * log ([Fundamental] / SQRT (SUM (SQR([Noise + Harmonics]))))

The above formula mentions SINAD as ratio of signal with noise and distortion components.

The equation above mentions relationship between SINAD vs THD and SNR.

The SINAD can also be expressed in terms of ENOB (Effective Number of Bits) as shown in above equation.

From the above description on THD, SINAD and SNR we can derive following points.
➤SINAD is equivalent to THD + Noise
➤SINAD value is > SNR value