Introduction: OSI model has been developed to establish communication between open systems. OSI model has seven layers. Each of these layers has well defined functions and they support the layer above and below of itself. Both RF (Radio Frequency) and PHY (Physical) layers are mapped to layer-1 of the OSI stack. RF layer is present when medium is wireless. PHY is known as baseband layer where as RF is known as wireless layer based on operations performed. The figure-1 depicts OSI stack with position of PHY and RF layers one above the other. 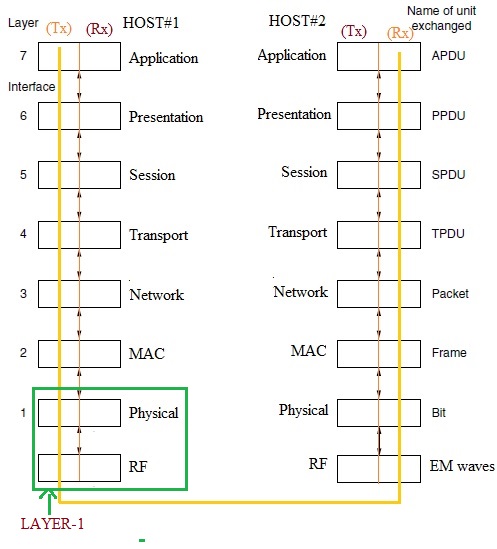 Layer-1 deals with transmission of information in the form suitable for wired/wireless medium such that they can be retrieved at the receiver end. It takes care of error recovery at the receiver caused by channel (wired medium or wireless medium). Refer article on basics of OSI and TCPIP layers >>.

The figure-1 depicts OSI stack of two hosts. The figure shows peer to peer communication between two hosts and unit of data exchanged at different layers. All the layers consist of transmitter (Tx) and receiver (Rx) parts inside both the hosts. RF layer exists only in wireless nodes or hosts.

What is RF Layer

RF is the short form of radio frequency which is used for transmission of EM waves into air using antenna. RF signals are characterized by its frequency (i.e. number of cycles per second measured as hertz). One hertz equals 1 cycle per second.

Different RF frequencies are used as per standards such as WLAN, Zigbee, GSM, LoRa, Sigfox, 4G LTE, 5G etc. The figure-2 below depicts RF and Baseband (i.e. PHY) parts of a wireless node or device.

Following parameters are very useful and used often with RF signal.
• Frequency: Number of cycles per second, measured in Hertz as explained above
• Wavelength: Distance between 2 consecutive peaks, measured in meters/centimeters as explained above
• Power: Strength of RF signal, measured in dB, dBm, dBW etc. Higher transmit power of RF signal helps it to travel more distance from its originating source. RF passive devices such as attenuators, RF Mixers, Isolators cause RF signal to get attenuated. RF amplifiers cause RF signal to get amplified. These gains and losses are measured in unit of decibel.
• Bandwidth: Width of RF spectrum, measured in Hz/KHz/MHz/GHz. It helps to know how much of information an RF signal can carry.

The baseband data such as voice or data or video are passed through the modulator and given as input to RF transmitter. After necessary frequency translation by RF upconverter, the RF upconverted signal is amplified by PA (Power Amplifier) before transmission into the air by RF antenna. At the receiver reverse operations take place such as LNA (Low Noise Amplification), RF down conversion, demodulation etc. to retrieve baseband information. The upconversion and down conversion is carried out using appropriate RF mixers, suitable LOs or RF synthesizers, Band Pass Filters (BPFs), amplifier MMICs, attenuator pads etc. Refer articles on C band RF Frequency Converter , mmwave RF Up Converter and Down converter and RF Transceiver design and development for more information.

Following are the functions of RF layer.
➨At the transmitter, it modulates baseband data using RF carrier as per system using RF Up converter. This modulated RF signal is amplified using PA (Power Amplifier) before transmission into air (by Antenna) or other medium as per system design.
➨At the receiver, the received RF modulated signal is amplified using LNA (Low Noise Amplifier) first. This amplified signal is down converted using RF down converter and fed to the baseband receiver.

What is PHY Layer

PHY stands for Physical, the keyword often used for Physical layer of OSI stack layer-1. It interfaces with MAC/upper layers at one end and with wired or wireless medium (i.e. RF) at the other end. Physical medium can be copper wire, twisted pair, fiber optic cable or space/vaccum.

The amplitude, frequency and phase of RF signal are used to map or demap PHY data during transmission and reception respectively. Refer AM/FM/PM, ASK/FSK/PSK, BPSK, QPSK, QAM for more information.

Following are the functions of PHY layer. It provides services to layers above and below of itself i.e. Network/upper layers and wired medium or wireless (i.e. RF) medium.
• It makes higher layer data to be suitable for transmission over the desired medium. It adds header and trailer as per transmission medium used.
• It introduces redundant data as per FEC technique (CC/CTC) at the transmitter to provide error correction at the receiver.
• It converts bits to symbols as per modulation technique used. This increases bandwidth efficiency of the system. For example,
In QPSK, 2 bits are mapped to 1 symbol
In 16QAM, 4 bits are mapped to 1 symbol and so on.
• It uses modules such as scrambler and interleaver to meet specific requirements of wireless channel.
• PHY receiver takes care of time synchronization, frequency synchronization and channel equalization.
Refer data flow through typical wireless physical layer.


The figure-4 depicts typical PHY layer modules. The MAC layer output (i.e. "Data In") is given as input to PHY Tx (Transmitter) chain. The "Data Out" refers to PHY Tx output which is fed to RF Transmitter (i.e. Upconverter) through DAC. Different PHY layers will have different FEC configurations and modulation formats. 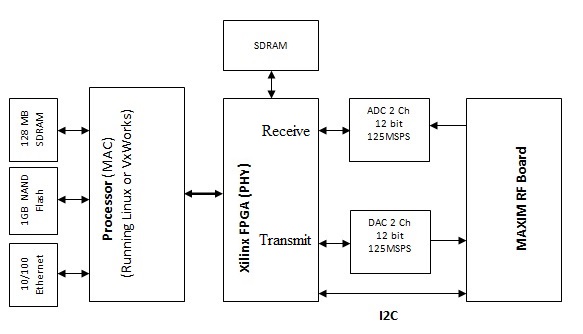 As shown in the figure-5, PHY layer is implemented on FPGA/Processor and upper layers such as MAC/IP are implemented on Processor. Memory is used between PHY and MAC for data exchange. RF and PHY layers are interfaced using DAC in the transmit chain and using ADC in the receive chain as shown. Refer interfacing between RF PHY and MAC >> layers.

Difference between RF and PHY