LiFi vs GiFi | Basic Difference between LiFi and GiFi 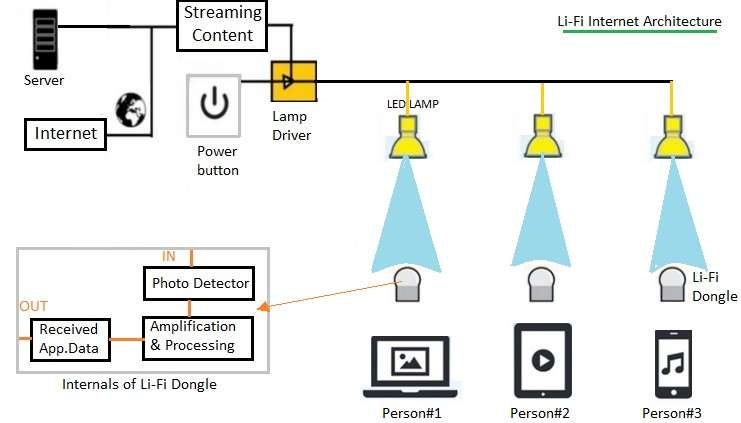 Following are the features of GiFi technology.
• It is first transceiver in the world developed on single chip using CMOS process.
• It operates at 60 GHz. (uses unlicensed band from 57 to 64 GHz).
• It allows wireless transfer of audio/video at 5 Gbps within coverage of 10 meters with very low power consumption.
• It is developed by NICTA (National Information and Communication Technology Research Center), Australia.
• The main component of gifi architecture is subscriber station which interfaces with several APs (Access Points).
• It is defined in IEEE 802.15.3C standard. It forms wireless PAN network in millimeter wave frequency band.
• Antenna is usually mounted on the roof which supports LOS communication.
• It uses TDD topology for transmission and reception with single antenna.
• It can be used with FDD topology using two antennas.
• Advantages: It offers very high data rate (7Gbps, BPSK) and low interference. Complex modulation schemes are not required. Antenna separation of about 1.25 mm is needed. Gifi technology is about ten times fast compare to wifi technology.
• Disadvantages: It supports short distance (about 10 meters) due to high attenuation which depends on frequency. It can be blocked by an object very easily. RTS/CTS does not work in gifi technology unlike wifi.

Compare LiFi vs GiFi | Table of Comparison between LiFi and GiFi

Following table compares LiFi vs GiFi and derives difference between LiFi and GiFi technologies with respect to various features.

what is difference between