Introduction:
• The figure-1 depicts overall time frame structure used in NB-IoT AS (Access Stratum).
• In downlink (DL) and uplink (UL), NB-IoT supports 15 KHz subcarrier spacing (SCS) frame structure. This frame consists of 20 slots as shown in figure-1.
• In UL (Uplink), one more additional frame structure with 3.75 KHz SCS is supported. In this frame structure, each frame is divided into 5 slots with each having 2ms duration as shown below in figure-3. 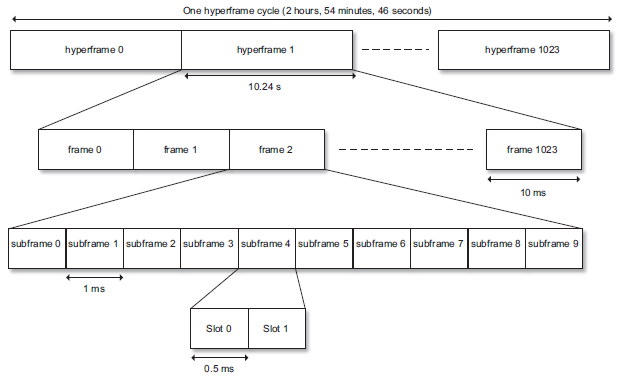 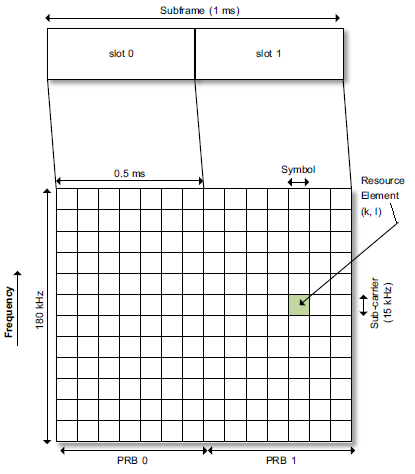 
In the downlink, concept of PRBs is used to specify mapping of physical channels/signals onto REs. As shown, RE (Resource Element) is used as smallest physical channel unit. RE identified by its index i.e. subcarrier index (k) and symbol index (l) within PRB. A PRB spans 12 subcarriers over 7 OFDM symbols with total 12 x 7 (i.e. 84 ) REs. One PRB pair is used as smallest schedulable unit in most DL cases which occupies 2 consecutive slots.


In the uplink, RU is used to specify mpping of UL channels onto REs. The definition of RU depends on configured SCS and number of allocated subcarriers to UL transmission. For 15 KHz SCS and 12 subcarriers, RU corresponds to PRB pair as shown.

The table summarizes definitions of RU for various NPUSCH configurations.