It is analog digital multiple access technique. As mentioned FDMA is the short form of Frequency Division Multiple Access. Here entire band of frequencies is divided into multiple RF channels/carriers having certain bandwidth. Each RF carrier is allocated to different users or subscribers.
Example: 890 to 915 MHz band having 25 MHz bandwidth in GSM is divided into 124 RF carriers of 200KHz BW each. 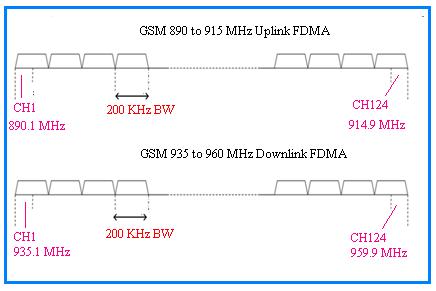 The figure-1 depicts FDMA applied in the uplink (890-915) and downlink (935-960) of GSM900 frequency band. There are two types of FDMA viz. fixed assignment and demand assignment type as per the allocations to the subscribers or users of the network.

As mentioned FHMA is the short form of Frequency Hopping Multiple Access.

Here carrier frequencies are varied within a wideband channel during the digital data transmission period. Following steps are followed by FHMA transmitter.
➨The digital data is divided into uniform sized bursts which are transmitted on different RF carrier frequencies.
➨The instantaneous BW (bandwidth) of any one transmission burst is much smaller than total spread BW. 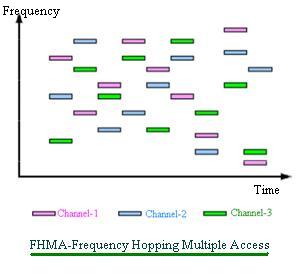 The system in which carrier frequency rate (Fc) is higher than the symbol rate (Fs) ; it is known as fast hopping system. Here single bit is transmitted in multiple hops.
Fc > Fs ...Fast Hopping

The system in which carrier frequency rate is less than or equal; it is known as slow hopping system. Here multiple bits are transmitted in hopping period.
Fc <= Fs ...Slow Hopping

In GSM every 20ms of voice produces 456 bits of information which are carried over four consecutibe bursts. This is due to the fact that, one GSM burst consists of 156.25 bits carrying two blocks each block having 57 bits of speech data. Each burst in GSM is transmitted on different unique RF carrier frequencies as shown in the figure-4.

The advantages of FHMA are as follows.
• It provides secure communication.
• It is immune to fading conditions.