Introduction:
Definition: Basically any object thrown at a target with the aim of hitting it is called missile.
In this context, a stone thrown at a bird is also known as a missile. The bird by using its power of reasoning may evade the missile (i.e. stone) by moving either to the left, right, top or bottom with respect to the flight path (trajectory) of the missile. Hence the missile in this case has been ineffective in its objective of hitting the bird (i.e. the target). Now if the stone is imparted with some intelligence and quick response to move with respect to the bird, to overcome aiming errors and the bird's evasive actions and hit it accurately, the stone now becomes a guided missile.
A guided missile is a rocket propelled missile whose path can be controlled during flight either by radio signals or by internal homing devices.
Based on their launch methods, there are two types of missiles viz. Ballistic Missile and Cruise Missile. 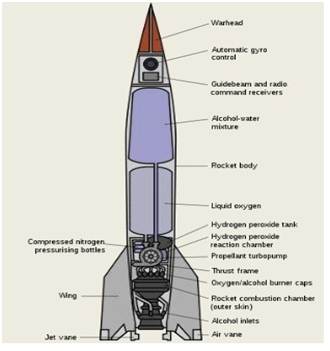 • A ballistic missile is a missile which has a ballistic trajectory over most of its flight path, regardless of whether or not it is a weapon delivery vehicle.
• It is launched directly into high layers of earth's atmosphere. It travels well outside the atmosphere and then warhead gets detached and falls down to earth. As it depends on gravity to reach its target, it is known as ballistic missile.
• Ballistic missiles are categorized according to their range, maximum distance measured along the surface of earth's ellipsoid from point of launch to the point of impact of the last element of their payload.
• Ballistic missiles can be launched from ships and land based facilities.
• Examples: Agni-I, Agni-II, Prithvi-I, Prithvi-II, Dhanush 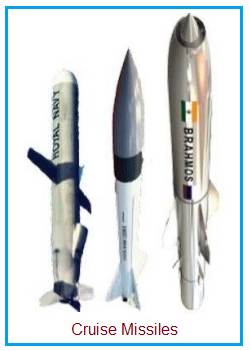 • A cruise missile is an unmanned self propelled guided vehicle which sustains flight through aerodynamic lift for most of its flight path and whose primary mission is to place an ordnance or special payload on a target.
• They fly within the earth's atmosphere and use jet engine technology.
• Depending upon the speed such missiles are classified as subsonic cruise missile, supersonic cruise missile and hypersonic cruise missile.
• Examples: Brahmos (Supersonic, 290 Km), Nirbhay (Subsonic, 1000 Km), Shaurya (Hypersonic, 750-1900 Km)