• The term "antenna port" is related to physical layer.
• It is the logical concept and not the physical one like RF antenna.
• Each antenna port represents specific and unique channel model.
• Dedicated reference signals are assigned for all the antenna ports individually, which helps in channel estimation and equalization. Reference signals are also known as pilot signals or pilot carriers.
• One resource grid is allocated per antenna port. There is one set of resource grids per transmission direction (uplink or downlink).
• There is one resource grid for a given antenna port (p) , subcarrier spacing configuration and transmission direction (downlink or uplink). Resource grid consists of number of RBs (Resource Blocks) for one subframe. Each RBs consists of 12 consecutive subcarriers in the frequency domain. Another element by name "RE" which refers to Resource Element spans 1 subcarrier on frequency domain and 1 OFDM symbol on time domain. Hence RBs will have one or many REs. 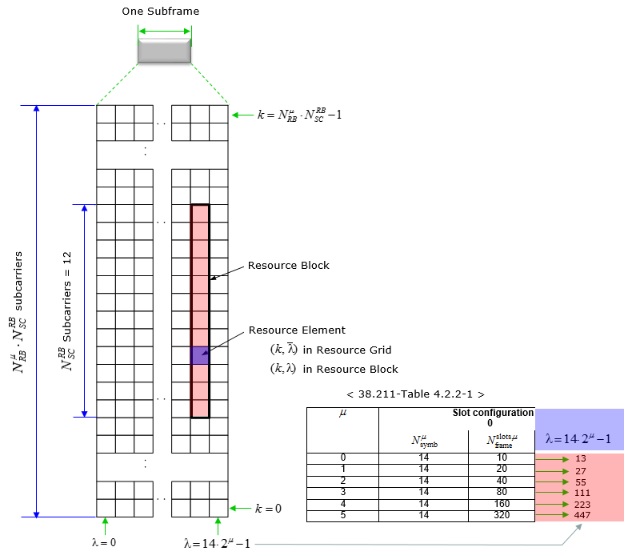 • Each element in the resource grid for antenna port (p) and subcarrier spacing configuration (μ) is called a resource element and is uniquely identified by (k,l)p,μ where k is the index in the frequency domain and "l" refers to the symbol position in the time domain relative to some reference point. Resource element (k,l)p,μ corresponds to a physical resource and the complex value ak,lp,μ.
• Figure-1 depicts concept of resource grids, resource blocks and resource elements applied in LTE and 5G NR wireless systems. 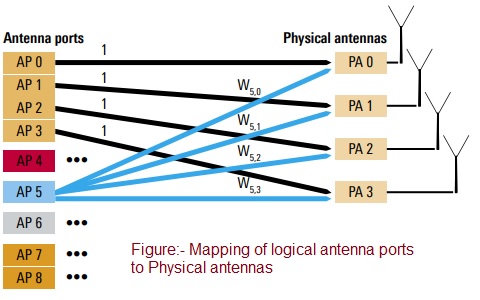 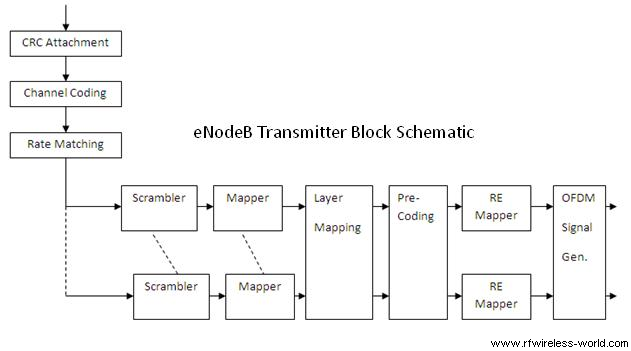 • As shown in the figure-3 (derived from LTE Physical Layer >>), modulated data symbols from all the layers are combined and re-distributed to each of the antenna ports before pre-coding module.
• After precoding algorithms are applied each of the precoded data symbols goes through separate REs (Resource Elements). This is shown by multiple RE mapper modules.
• An independent resource grids are created for each of the antenna ports separately before IFFT operation during OFDM signal generations.
• Section "6.3.1.5 Precoding" in 3GPP TS 38.211 various Precoding matrix tables are mentioned. These tables are used for different combinations of (layers, antenna ports) as follows. One such table is mentioned below.
-Single layer/Two layer/Three layer/Four layer
-Two antenna ports/Four antenna ports
Note: Here for simplicity, "number of columns" refer to number of layers in a physical layer where as "number of rows" refer to number of antenna ports.