In digital beamforming, amplitude/phase variation (Wk) is applied to digital signal before DAC conversion at transmit end. The reverse process is done after ADC & DDC operations are performed. As shown the received signals from antennas are first passed from ADC converters and digital down converters (i.e. DDCs) before summation operation. 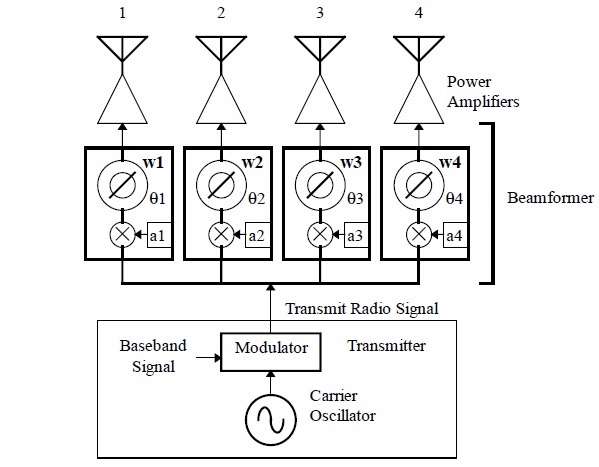 The figure-1 depicts analog beamforming transmitter. As shown baseband signal to be transmitted is modulated first. This radio signal is splitted using power divider and passed through the beamformer which has provision to change amplitude (ak) and phase (θk) of the signals in each of the paths going towards stack of antennas. Power divider depends on number of antennas used in antenna array for example 4 way power divider is needed to address the need of 4 antenna array. 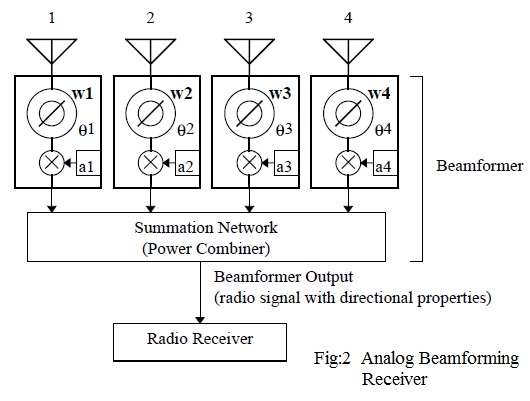 The figure-2 depicts analog beamforming receiver. As shown in the receiver block diagram, complex weight is applied to the signal from each antenna in the array. Complex weight consists of both amplitude and phase. After these is done, signals are combined into one output. This provides desired directional pattern from array of antennas. 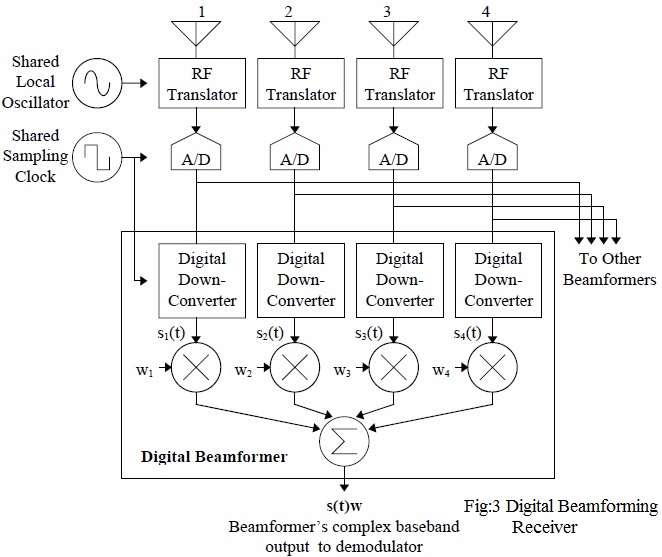 The figure-3 depicts digital beamforming receiver. As shown in the figure, amplitude scaling, phase shifting of each antenna elements and their sum have been carried out digitally.

• Digital beamforming consists of RF translators, A/D converters, DDCs, complex weight multiplication and summing operation.
• RF Translator converts higher RF signal frequency to lower IF signal frequency. This is done using RF mixer. LO signal is fed to the RF mixer in order to perform RF to IF conversion. Appropriate filters (bandpass and lowpass) are used at the input and output of the RF mixer.
• This IF signal is converted to digital equivalent using A/D converter using appropriate sampling clock.
• The digitized IF signal is passed to the DDC (Digital Down Converter). The DDC using cos(2*π*Fc*t) and sin(2*π*Fc*t) and low pass filtering to convert digital IF into baseband I/Q components or combined I+j*Q signal. The combined signal is designated as s(t) in the figure-3.
s(t) = x(t) +j*y(t)
Where, s(t) -> complex baseband signal
x(t) -> i(t) i.e. real part (I)
y(t) ->-q(t) i.e. imaginary part (Q)
j = SQRT(-1)
• Complex weights are being applied to these baseband signals (s(t)).
• The results from these antenna elements are summed up to produce baseband signal with desired directional pattern.
• The signal after summation is given to demodulator to retrive the information from radio signal.