What is Radar Speed Signs?

Introduction:
• Radar Speed signs as the name suggests indicates speed of vehicles passing near from it. It is also known by other names such as radar feedback sign, speed feedback sign, radar sign and Your speed sign etc.
• It is constructed using series of LEDs, radar hardware, battery etc.
• The function of this sign is to alert drivers to slow down when their vehicles speed increases speed limit marked on the road.
• It is used as traffic calming device. It helps to avoid accidents due to lower speed limit better than speed bumps or humps due to flashing LED indication.
• It uses battery packs and can be solar powered or AC powered.
• It is available in various display sizes such as 11", 13" and 17" .
• It supports bluetooth and wifi standards and hence can be controlled using mobile apps.
• It is ideal to be used for school zones, busy industrial sites, construction sites etc. 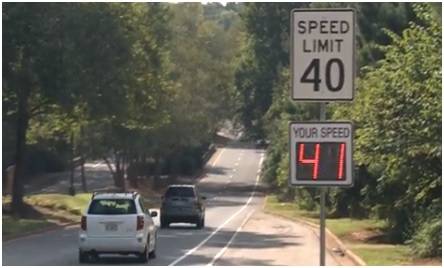 Following are the benefits or advantages of Radar Speed Signs:
➨It provides great safety in comparison to speed bumps which are irritating and painful. Moreover speed bump makes traffic speed unpredictable as some vehicles do not slow down.
➨It provides feedback to the drivers in realtime which helps them to switch from auto pilot mode to alert mode. They in turn reduce the speed of the vehicle and hence help in avoiding accidents. After installation of radar signs, speed of the vehicles have gone down from 50 mph to 30-35 mph. This concept reduces accidents to a greater extent.
➨It is very easy to install it at any place such as existing pole, backside of vehicle, mobile petrol stands etc. It is most portable and rugged in design with less weight. It does not require more than a minute to install it. It is very useful for road and utility construction crews.
➨It is completely weather proof and hence operates 24 x 7 in all weather conditions unlike speed bumps.
➨The units are available with two batteries, each giving backup of about 7 days.
➨It uses wireless bluetooth connectivity and hence can be connected with mobile phone or tablet using appropriate app as per model. This helps in controlling various parameters of radar speed sign such as speed unit (miles per hour or km per hour), stealth mode ON/OFF, LED brightness, schedule of operational times etc.
➨It is designed to be theft resistant by using roundheads security bolts for fixing and lockable enclosure. Moreover it is bulletproof to avoid any vandalism.
➨It helps in generating valuable reports for traffic police which include vehicle counts, peak traffic times, speed violations etc.
➨Usually all the radar signs are certified as per FCC Part 15 regulations. Hence they do not require an operating license for use.

Following are the drawbacks or disadvantages of Radar Speed Signs:
➨It is expensive but it is available at half price of speed trailer.
➨The radar speed sign can detect vehicles which are 1200 feet away with K-band operating frequency.
➨When there are more number of vehicles at different speeds, it is difficult to make use of the radar speed sign.
➨Radar Speed Signs provide satisfactory results in certain beam width (12 +/- 2 degrees) with certain accuracy (+/- 1.0 mph) as per their design.
➨Radar Speed Sign can detect vehicle speed in certain range for example 5 to 127 mph.