What is Micro LED?

Introduction:
The micro LED technology consists of miniaturized LED with matrix. It is next generation display technology. It is also known as MicroLED, mLED or μLED.

Micro LED displays comprise several microscopic LEDs, which self illuminate per display pixel just like OLED panel. In this type of LED, individual micro LEDs of size ranging from 1-10 µm are transferred in large volumes onto IC substrate. This substrate can be hard, flexible, transparent or none transparent. This LED unit is smaller than 100 micrometers in which each pixel is individually addressed and driven to emit light.

Micro LEDs use inorganic materials such as Gallium Nitrate (GaN) which are self emitting and do not need back light for its operation. 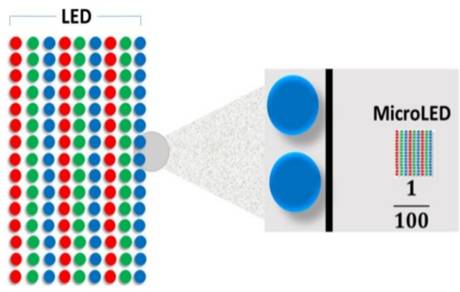 When this LED is forward biased, electrons from conduction band of the semiconductor recombine with holes from valence band to release the photons which emit monochromatic colored light.

Benefits or advantages of Micro LED

Following are the benefits or advantages of Micro LED:
➨It offers higher luminous efficiency and higher brightness and shorter response time due to use of inorganic materials.
➨It is highly reliable and offers higher contrast.
➨Due to its self illuminating characteristics it works without backlight. Hence it is smaller in size and lighter in weight. Moreover it is thinner and consume less power.
➨It offers wide viewing angles which provide greater comfort to the viewers.
➨It offers longer lifetime and it is environmentally stable.
➨It offers faster refresh rates i.e. short response time (usually in nanoseconds) .
➨It can be constructed using curved/flexible backplanes.
➨It offers high resolution/pixel density.

Drawbacks or disadvantages of Micro LED

Following are the drawbacks or disadvantages of Micro LED:
➨The requirement of specific machinery and facilities make it expensive to manufacture micro LEDs.
➨It requires some time for mass transfer technology to get mature. This makes it difficult for micro LEDs to become commercial products.