What is IoT interoperability?

➨Interoperability: The main objective here is to verify that independent implementations(i.e. products) of same standard interoperate in the system without any potential issue as desired.
Examples:
1. GSM base station manufactured by Ericsson and GSM mobile station manufactured by Samsung interoperate together.
3. In general, base stations and mobile subscribers manufactured as per one standard (i.e. GSM here) by different vendors co-exist together in cellular network.

Interoperability tests are essential due to following reasons.
• Errors and ambiguities in the standards or incompatible standards
• Human erros while coding the standard or different understanding of the standard while implementing it to develop the products.
• Networks use different traffic queuing methods etc. 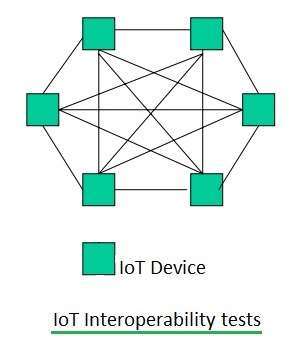 ➨Interoperability Testing: It is a method for determining to what extent two or more implementations function together for some range of applications over a specific communications medium.

As shown in the figure-1 interoperability testing is only meaningful in single pair combinations of the products. N interconnected products will have ( N2 - N ) /2 distinct product pair combinations.

As described in cellular IoT, Internet of Things will have products from different standards such as Zigbee, Zwave, Bluetooth, GSM, LTE etc. The IoT interoperability testing is a challenge and the test specifications need to be carefully developed in order to make IoT projects successful.