Definition: Touchscreen is a human-machine interface. It gets activated by user either with a stylus or with single/multi finger touch on the panel where specific functions are displayed. Touch input can instantly provide audio/visual feedback to the user to confirm the choice made. The beauty of this touch screen technology is that user can directly interact with the device without the need of mouse or keyboard. 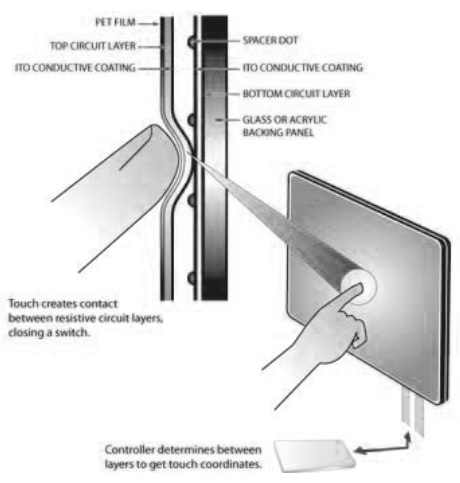 Following are the characteristics of ideal touch screen:
• It should not degrade image on the display panel.
• It should have resolution equal to video display.
• Activation should be independent of nature of styli and gloved/non gloved finger.
• It should be capable of providing feedback to user.
• It should have modular architecture.
• It requires precise control and selection of targets.
• It should withstand harse environmental conditions such as moisture, pressure, grease, dust, vibration etc.

Following are the advantages of touch screen technology:
• It is simple technology and user friendly.
• It does not require mouse or keyboards.
• Wide variety of touch screen options are available as per need.
• It can withstand against shock and vibration.
• It can withstand against chemical or oil vapours.
• The technology is immune against nearby electric or magnetic fields.
• It is scratch resistance and hence will have longer life.

Following are the disadvantages of touch screen panel:
• It is not easy for elders to learn this technology and often leads to wrong touches which leads to opening of unwanted functions on the device.
• Capacitive surface type touch screens do not support touch with gloves.
• Capacitive and projected capacitive do not support use of soft tip stylus.
• Touch screen technology is evolving and it will take sometime to have cost affordable devices for common man use.