What is RF Filter

RF filter is used to pass radio frequencies within the desired band and blocks the undesired or unwanted radio frequencies in a wireless communication chain. The filters can be various types based on requirement. For example in the RF up conversion chain below, used to convert 70 MHz IF input to 6GHz RF output filters are employed as per need in the design.

In the first stage of mixing, local oscillator of fixed value 1112.5MHz is passed through microstrip based 3-4 stage hairpin RF filter can be used. The round corner edge coupled band pass filter of microstrip type is used to filter the output of synthesizer of value 4680 to 5375MHz. 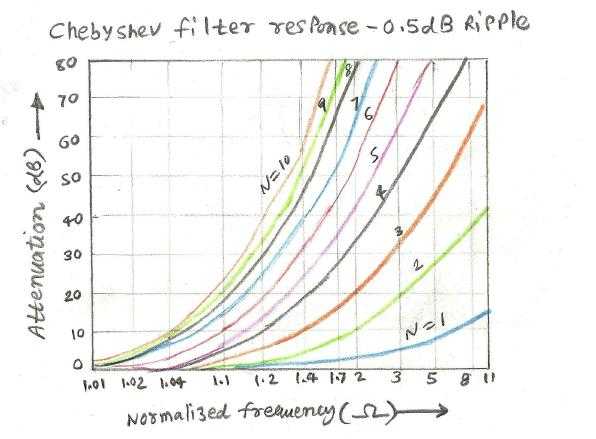 Based on filter order N (here 5) and using Filter coefficients table as mentioned above for Chebysev LPF for 0.5dB ripple we will determine filter coefficients, which are g1=1.7058,g2=1.2296,g3=2.5408,g4=1.2296,g5=1.7058,g6=1. The figure above mentions low Pass Chebysev Filter Coefficients for 0.5dB ripple for various orders of the filter. Following figure mentions LPF with order N using discrete L and C components. 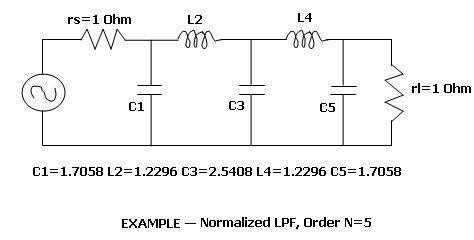 Step 2: Now use Richard transformation to replace inductor by short circuit line and capacitor by open circuit line. Length of the lines should be λ/8. Figure 4 below is obtained after Richard- transformation is applied to discrete circuit in figure 4 for rf filter design. 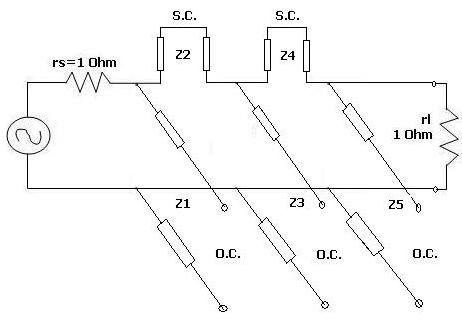 Step 3: Now convert all the short circuited stubs, which are in series into shunt connected open circuit stubs. This can be achieved using Kudora's identities. This is depicted in figures 6-9 below. To apply Kudora's identity unit elements are introduced in the circuit where ever required as shown in figures below. 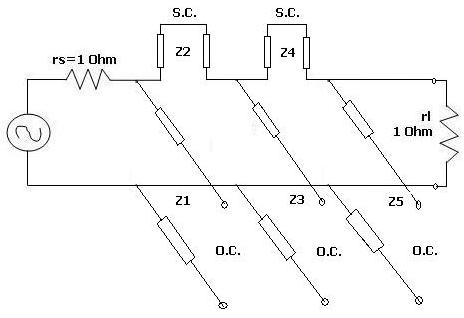 In figure 6, unit element is inserted at the input and output without changing rest of the elements. Now Z1 and Z5 are converted from open circuit shunt elements to the short circuit series elements.

Now two more unit elements are inserted at the source and destination. And using Kudora's identities z1,z2,z4 and z5 elements are converted from S.C. series elements to the O.C. shunt elements

The same RF filter design is incorporated using built in micro strip line elements in RF/microwave design software such as Agilent EESoF or ADS or microwave office from AWR.

Step 4: Following is the realization of RF filter as micro-strip based on specifications mentioned at the beginning of this article.

Step 5: This microstrip layout mentioned in figure.10 is etched on the respective dielectric based on frequency of operation as mentioned and tested with connectors using scalar network analyzer (SNA).

The same method has to be used for band pass and high pass RF filter design. Only thing has to be taken care is to choose filter order N using normalized frequency versus attenuation curve. Based on this order N, appropriate filter coefficients have to be derived from table with required ripple.