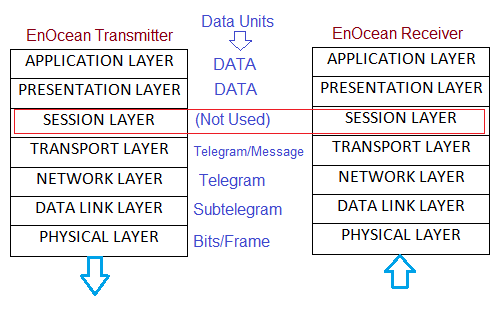 • The operations performed at the EnOcean transmitter are adressing of telegram, medium access control using CSMA/CA or LBT (Listen Before Talk), subtelegram structure formation including checksum/CRC-8 mechanism, encoding of subtelegram and radio transmission.

Following are the services performed by Physical layer.
• Encoding at the transmitter and decoding at the receiver, handles inverse of bits operation at transmit end and consecutively handles the same at receiver to recover data bits appropriately to help in recovery of subtelegram at data link layer.
• Radio transmission and radio reception at transmitter at receiver respectively.

Let us understand physical layer operations performed on the input data (i.e. one or more subtelegrams) received from data link layer. Following are the operations performed at the transmitter end.
➨This layer does frame formation as per format above after receiving data from data link layer based on ASK or FSK.
➨It converts bits to symbols as per modulation scheme i.e. ASK or FSK as per modulation parameters defined in the standard. ASK modulation uses either 315 MHz or 868 MHz RF carrier where as FSK modulation uses either 902 MHz or 928 MHz as per countrywise allocations. Refer ASK vs FSK vs PSK >> for difference between ASK and FSK modulation types.
➨In ASK, protocol is inverted before transmission on air interface and 8 to 12 coding scheme is used.
➨In FSK variant of physical layer, GFSK filter is used as per national regulations.

At the EnOcean receiver, reverse operations to above are being carried out to recover the data (i.e. subtelegrams) which are being forwarded to data link layer.

Let us understand data link layer operations performed on the input data (i.e. telegram ) received from network layer.
➨The data (i.e. telegram) received from the network layer is packed as per subtelegram structure. 8 bit checksum or 8 bit CRC is calculated and appended as shown in the structure above. The checksum is calculated by simple sum of all the bytes of subtelegram except "HASH" value field. The CRC-8 is calculated using generator polynomial X8+X2+X+1 and following algorithm as described in the specification. This "last byte" helps in data integrity check at the receiver.
➨To ensure reliability of transmission, three identical sub-telegrams are transmitted over a fixed period.
➨Like TDMA, all the transmitters transmit subtelegrams at different time intervals and within the defined Tx maturity limit (i.e. 40 ms). This helps in avoiding collision of subtelegrams in the air.
➨Moreover transmitters follow LBT (Listen Beforee Talk) algorithm to avoid collisions in the channel (i.e. air medium). The LBT technique consume more energy and hence it is avoided in energy harvesting wireless devices.

Let us understand network layer operations performed on the input data (i.e. message or telegram or data) received from upper layers.
➨It handles number of repeater hops during telegram transmission. Maximum of two hops are allowed between transmitter and receiver. Status byte is used by network layer to indicate status of subtelegram during transmission i.e. repeatition status and its sender i.e. original transmitter or first/second repeater.
➨Network layer performs addressing of each telegram using encapsulation mechanism at transmitter and de-encapsulation at receiver. It inserts "DESTID" field with four bytes preceding to TXID in the original telegram before transmission.
➨Redundancy is used during transmission if no other secured mechanism is used such as acknowldege. Maximum of two repetitions are used.

• EnOcean Certification Specification (part 1a), Air Interface (ASK) V1.4, Released on Feb.10, 2019
• Visit www.enocean.com for everything you would like to know about EnOcean technology from inventor and pioneer of this energy harvesting wireless technology.
• EnOcean Alliance