What is performance testing ?

As mentioned performance testing basically is a non-functional type of testing. This is implemented and executed during architectural and construction phase of the software development life cycle. It evaluates various performance aspects such as reliability,scalability and speed.

Why it is needed ?

The main goal of performance testing is to remove any problems associated with the system to function well in the real time environment. It is carried out before the product or system is launched in the market or deployed. Performance testing monitors and reports various parameters which include CPU usage, memory usage, power consumption, network bandwidth , cache performance and so on. 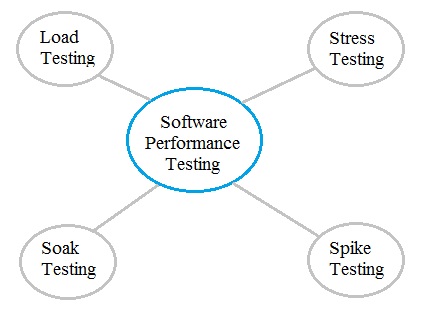 The performance testing is divided into various types of testing based on the application and severity of the test. They are load testing, stress testing, soak testing and spike testing.

The load testing tests system's behavior under specific load conditions for example, multiple users accessing the application simultaneously within certain time period. This is most applicable for testing client server based web applications.

The stress testing tests the software application under extreme load condition to find any issues when the software is subjected to such conditions of stress. This test is carried out for the shorter duration.

The soak testing tests the application under extreme load conditions and for longer period of time. This is very important as for longer duration system might crash due to memory leakage or CPU failures. These can be easily identified by soak testing which cannot be detected by load and stress type of testing.