As mentioned TTC stands for Telemetry, Tracking and Control system.

Following are the functions of satellite TTC:
• The TTC subsystem makes it possible to establish communication to and from spacecraft(i.e. satellite) from the ground.
• It is used to observe and to control spacecraft's functions and conditions from the ground. The telemetry system is used to report the status of on board subsystems to the ground station.
• Carrier Tracking
• Ranging
• Command reception and detection
• Telemetry modulation and transmission 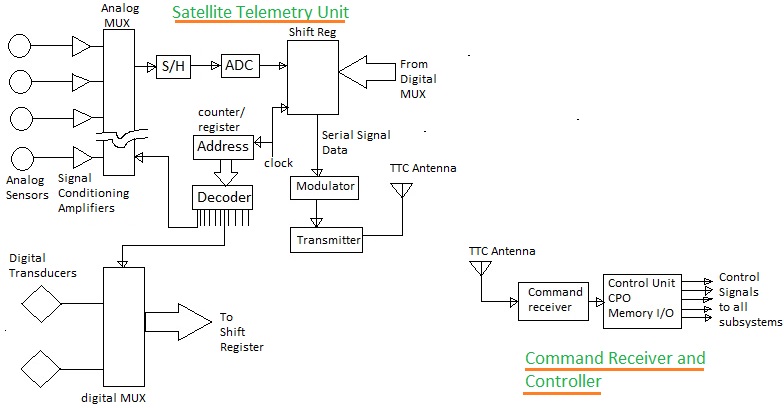 The figure-1 depicts two parts viz. one at satellite or spacecraft and the other at ground station. As shown telemetry system consists of various electronic sensors for measurement of radiation level, temperature, power supply voltages etc. It consists of digital and analog sensors.

As shown analog sensors are interfaced with multiplexer. They are selected as per need and are converted to digital value using ADC.

This digital signal is modulated and RF up-converted before being transmitted using TTC antenna.

In the similar way digital transducers are interfaced with digital MUX.

The transmitted information from satellite is relayed back to earth. With the received information, ground station determines operational status of satellite at all the times. Satellite operates on S, C or Ku bands.

A command and control system permits ground station to control the satellite. The control signals are formed based on different digital codes which informs satellite what action need to be taken. The commands are used for various functionalities such as
• to initiate telemetry sequence
• perform orientation of antenna
• activate thrusters for attitude control

In order to track and to maintain attitude of the satellite, on board thrusters are fired from the ground station. This is done even to re-orient antennas of spacecraft, to have maximum exposure of solar panel to the sun and to make corrections of satellite based on infrared sensors.