The geographic area or region is divided into individual hexagonal cells. Each of these cells are equipped with cellular tower and base station (known as BTS in GSM, eNodeB in CDMA and eNB in LTE). Cellular network supports hundreds of mobile cell phones operating in different frequencies, slots and codes to allow simultaneous operations. They also maintain their connections while moving from cell to cell. 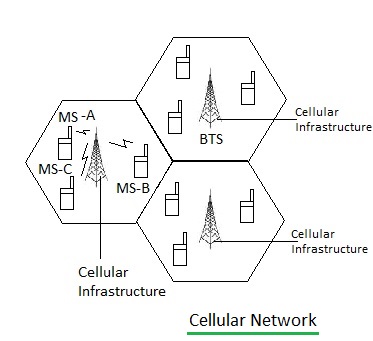 In a cellular network, the site where antennas and electronic communication equipments are located is known as cell site. It is constructed usually at the higher location. It houses antennas, transceivers, DSPs, control circuitry, GPS receiver, power sources and shelter structures.

Function: The major role of cell tower is to mount antennas for transmitting and receiving RF signals to/from mobile cell phones or devices. To cover larger areas of the earth, cell towers are elevated to height of about 50 to 200 feet. The cell tower communicates with the nearby towers through RF frequency.

Cell tower types depends on density of mobile phone users to be supported based on region and applications of use. The different cell types include macrocells (10 miles) , microcells (1 mile diameter ), picocells (250 yards) and femtocells (limited to building).

There are different access techniques by which cell phone users use cell tower and its resources. The popular among them are FDMA, TDMA and CDMA.

At very high power levels RF radiations from cell phone towers affect the human beings due to its heating effect. Due to this, radiation levels are kept within limits as specified by regulatory bodies. This applies to cell phone radiation also. Refer EM radiation>> and radiation protection ways>>. 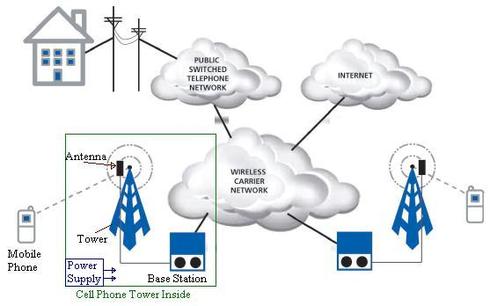 The figure-2 depicts basic cell phone tower components viz. elevated structure, equipments, antennas and utilities. It include following parts.
• Cell phone tower structure: There are different types of tower structures as described below. The proper support need to be provided in order to elevate such structures above the ground level.
• RF and baseband equipments: The equipments are mainly are of two types indoor and outdoor or roof mounted. The indoor equipments are usually placed in a room. The indoor equipments are connected with the outdoor equipments or antenna with the help of coaxial cable. RF equipments convert baseband information in the form compatible to be transmitted or received by the RF antennas. Baseband equipments provide interfacing with voice/data equipments. Often baseband and RF equipment are combined and known as modem.
• RF Antennas: Each telecom carrier uses multiple antennas on the cell tower. Typically each site houses 3 to 18 antennas. Number of antennas are increased based on increase in capacity of the subscribers.
• Other utilities: The major utilities include power supply, UPS (Uninterrupted power supply) and AC to DC rectifier used to power the electronic circuits and equipments. UPS is used as battery backup system in case of failure of mains power.

Cell site consists of various interfaces with PSTN for wired telephony, with PSDN for internet connectivity and with other cellular towers. The cell tower site is connected with other sites with the help of fiber optic cables, terrestrial microwave link, satellite link etc. 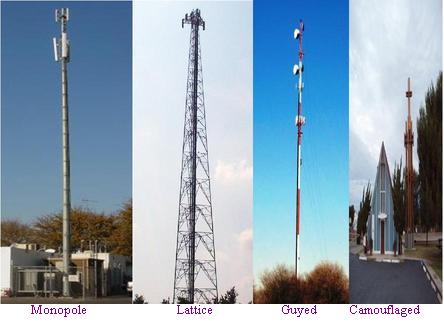 There are different types of cell phone towers viz. Monopole, Lattice, Guyed, Camouflaged etc. The figure-3 depicts main types of tower used in cell phone network and are described below.
• Monopole tower: It requires one foundation and height does not exceed about 200 feet. In this type, antennas are mounted on exterior of the tower.
• Lattice tower: These towers are usually seen along the highways. They are three and four sided.
• Guyed tower: These towers are cheap to construct but covers large area. Radio and TV stations use this type of cell phone tower. This tower uses guy wires connected to the ground to provide the support to the straight tower in the middle. It is about 300 feet and above in height.
• Camouflaged tower: They are more expensive compare to other cell tower types. They are required by zoning.