What is Drone and UAV (Unmanned Aerial Vehicle)?

The small aircraft which operates by itself without any human being is known as Unmanned Aerial Vehicle. It is also referred by its abbreviation as UAV. It is popularly known as Drone.

The drone can be either remotely controlled or it can travel as per predefined path using complex automation algorithm built during its development.

In general, UAV (Unmanned Aerial Vehicle) is the combination of Drone in the air and control system on the ground.

Drone operates at RF frequecies of 2.4 GHz and 5.8 GHz. One of these frequencies is used to control aircraft from ground system while the other frequency is used to beam or relay video FPV. The common frequencies used in FPV video transmission are 900MHz, 1.2GHz, 2.4GHz and 5.8GHz. Following table mentions required power levels in drone communication. 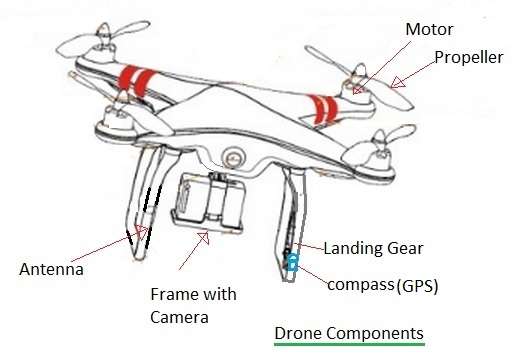 
The figure-1 depicts major parts of a drone. As shown it consists of body, frame, propellers and controller. Different drone components are housed in all these drone parts as described below.

Drone Body: The body houses battery power supply, control system and sensors. Gyroscope and accelerometer are used as sensors in drone for stabilization purpose. Advanced drone UAV consists of camera and wifi transmitter/receiver including high gain directional antenna.
Refer Drone Sensors➤.
Drone Frame: The frame is made of nylon and carbon fiber materials. Due to this fact drone is strong and light weight. The frame is used to hold shell of the body and frame bars. It holds propellers. Landing gears used for landing are mounted at the end of frame bars.
Propellers: They are used to produce force to lift the drone in the air. They are powered using motors. Total 4 motors are needed for 4 propellers. These motors are powered using battery. Total four number of propellers are needed, two for clockwise movement and the other two for counter clockwise movement. 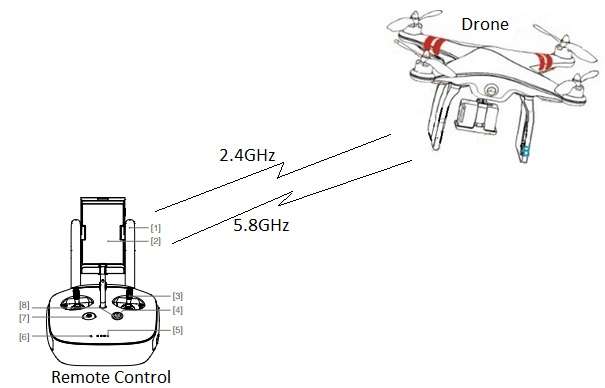 As mentioned above there are two frequencies involved in the operation of drone or UAV (Unmanned Aerial Vehicle). One is used for controlling the drone from the ground system and the other is specifically used for video or image transmission.