Resistance Temperature Detector(RTD):
The materials such as platinum and nickel is commonly used. The resistance of these wire elements will vary with temperature and they will have high accuracy. They are available in different configurations for immersion as well as surface mount applications. The equation below mentions relationship between temperature and resistance of conductors. 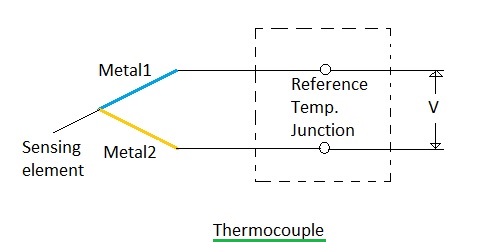 The table below covers thermocouples of various code types such as type E, Type J, Type K, Type N, Type T and Type U. It mentions conductors used as well as sensitivity limits.

Resistive Position Transducer:
The principle of the resistance transducer is that the physical variable under measurement causes a resistance change in the sensing element.
A common requirement in industrial measurement and control work is to be able to sense the position of an object or distance it has moved.

The equation is of simple potentiometer, here R is resistance change, ρ is density , L is length and A is the Area.