Due to advent of more and more wireless cellular technologies and use of the cellular networks by large number of mobile phones have initiated concerns to increase the network capacity. RF engineers have developed the techniques known as fequency reuse and spatial isolation. Initially frequency reuse was available for omnidirectional antennas which was creating inter cell interference. After the advent of sector array antenna frequency re-use have become more efficient yielding the better cell capacity within a cell. But they have drawbacks of increase in intra cell interference.

Spatial isolation can be achieved by focusing the beam in a particular region and hence incrase the cell capacity by providing the service to mobile users in different regions using different selective beams.

But the spread of radiation pattern of antenna will have adverse effect in adjacent sectors of the same cell as well as adjacent cells. This effect leads to degradation in the quality of service requirement of the cells. As a solution to this, concept of tilt has been tried by RF engineers. 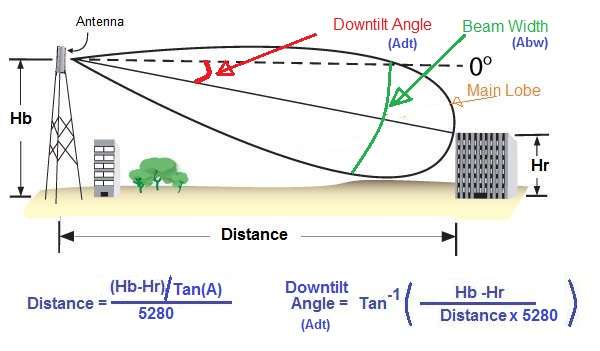 Dictionary meaning of tilt is "incline or bend from vertical position". The tilt applied on the upward is referred as uptilt and the tilt applied on the downward side is referred as downtilt. The downtilt is depicted in the figure-1. The downtilt is most beneficial and the same has been taken into consideration through out our discussion. Our focus of discussion will be horizontal beam and not vertical beam as shown in the figure-1. Mechanical tilt means physically or manually downtilting the antenna. This type has drawbacks as mentioned later. Due to these drawbacks, electrical tilt has been invented by the RF and system engineers. Electrical tilt does not involve any physical movement but changes the phases of the radiation pattern of individual antennas used in sector array antenna. Electrical tilt can also provide the gain to support concept known as beamforming to extend the coverage.

Antenna Mechanical tilt and their drawbacks 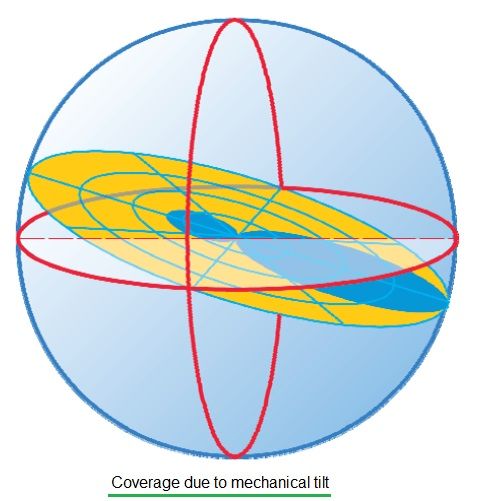 Till today, RF engineers has been using mechanical tilt method to alter the position of the RF antenna. But as depicted in the figure-2, antenna in this method tilts only one plane. Moreover when the front part is tilted down to decrease the gain on horizon, the back side tilts up side. This results into change in front to back ratio as well as increase in inter sector interference. Mechanical tilt results into pattern blooming as shown in figure-4. The outer most part of pattern in fig-4 right side postion represents mechanical tilted antenna with 0 degrees of downtilt. Change in radiation patterns with respect to different degrees of mechanical tilt is also shown.

Antenna Electrical Tilt and their benefits 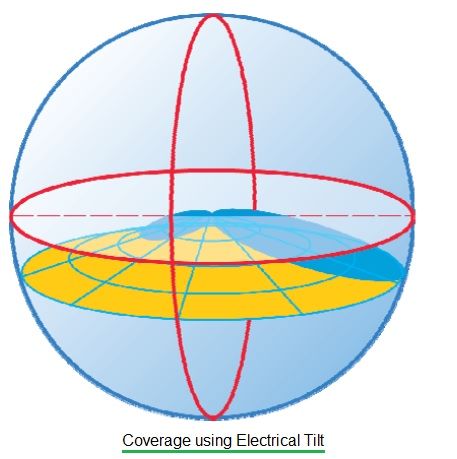 Electrical tilt concept has provided great amount of control to shape the radiation pattern of antenna and boost the pattern as desired. This has made life of cellular operators very easy. Electrical downtilt changes the phase element of the antenna's different radiating elements separately and simultaneously. This will allow RF engineers to change the gain of the pattern around the tower in full 360 degrees. Figure-3 depicts the coverage achieved using electrical tilt type. 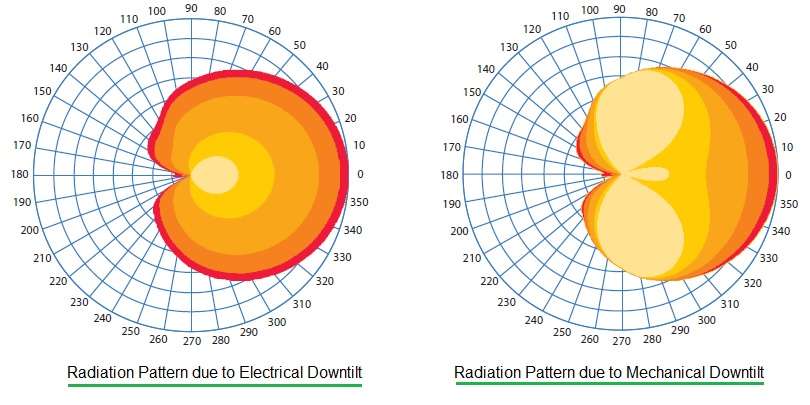 For antenna downtilt angle equation and to calculate distance from the angle refer Antenna Down tilt angle and horizon distance calculator.