What is a semiconductor?
They are materials whose electrical properties lie between conductors and insulators.
For example: Silicon and Germanium

Conductivity of insulators, semiconductors and conductors are as follows.

Semiconductor materials are categorized as follows. The same have been shown in the periodic table of elements.
• Elemental semiconductors include Si and Ge. They compose of single species of atoms.
• Compound semiconductors include combinations of atoms of column III and column V and some atoms from column II and VI. Combinations of two atoms result in binary compounds.
• There are three element (Ternary) compounds e.g. GaAsP and four element (quaternary) compounds e.g. InGaAsP. 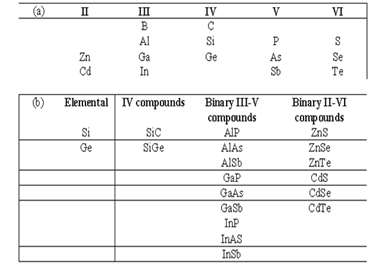 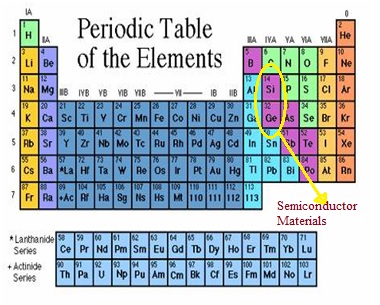 • The wide variety of electronic and optical properties of these semiconductors provides the device engineer with great flexibility in the design of electronic and opto-electronic functions.
• Ge was widely used in the early days of semiconductor development for transistors and diodes.
• Si is now used for the majority of rectifiers, transistors and integrated circuits.
• Compounds are widely used in high-speed devices and devices requiring the emission or absorption of light.
• The electronic and optical properties of semiconductors are strongly affected by impurities, which may be added in precisely controlled amounts (e.g. an impurity concentration of one part per million can change a sample of Si from a poor conductor to a good conductor of electric current). This process called doping.

P-type material:
When a trivalent element(e.g. indium, gallium) is added to tetravalent semiconductor ( germanium or silicon) then a deficit of electron is produced for each impurity atom; such type of material is known as P-type material.
Example: Doping silicon or germanium with phosphorus (having five valence electrons).

N-type material:
When a pentavalent element (e.g. arsenic, antimony) is added to tetravalent semiconductor, then a surplus electron is produced by each impurity atom; such type of material is known as N-type material.
Example: Doping silicon or germanium with boron (having three valence electrons).

What is difference between