This technology which works by emitting sound pulses and detecting or measuring reflected pulses is known as SONAR. SONAR locates object by estimation of acoustic travel time and direction of arrival between sonar sensor and the object. SONAR technology is similar to radar, ultrasound and seismics technologies. There are two types of SONAR viz. active sonar and passive sonar >>.

There are two types of architectures in underwater sensor network (UWSN) viz. centralized and de-centralized. In centralized architecture, a group of sensor nodes are installed at the bottom of ocean. These nodes communicate with one or more underwater installed sinks (uw-sinks). These uw-sinks operate as relays between underwater nodes and surface station.

In decentralized architecture, nodes communicate with sea surface station via their neighbour nodes. There is no uw-sinks or relays needed. Nodes are installed at different layers of depth. Nodes at the bottom communicate with the nodes which is above it and lesser in the ocean depth and so on. This way information reaches till the upper part of the nodes which are in range with the sea surface station. This way ocean information reaches to surface station. 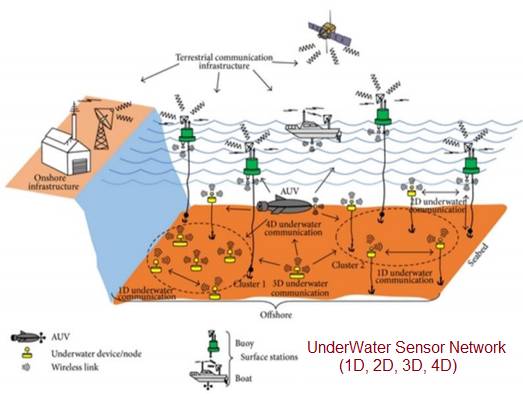 • In 3D UWSN architecture, sensors are deployed in the form of clusters which are anchored at different depths and heights.
• 3D UWSN are of two types viz. static 3D UWSN and 3D UWSN using AUV (Autonomous UnderWater Vehicle).

• 4D UWSN architecture is combination of fixed 3D UWSN and mobile UWSN.
• This 4D-UWSN with acoustic sensor networks and under water mobile (ROVs, AUVs) sensor networks can be used on large scale for exploration in the deep sea. ROV stands for Remotely Operated Vehicles where as AUV stands for Autonomous Underwater Vehicle.
• Mobile underwater ROVs collect data from anchor nodes and relay it to the remote station.