Horn antenna is regarded as flared waveguide. It can work more efficiently along with parabolic reflector as found in dish antenna. Horn antenna is used in satellite/microwave applications.

Normal waveguide if used for transmission of E-M waves it will not tightly coupled with free space impedance and results in reflected power and standing waves. The mismatches are avoided by flaring the end of waveguide which creates horn antenna. The more gradual the flare, better is the matching and lesser the losses. This results in greater gain and directivity.

Depending upon the flaring there are different horn antenna types viz. sectoral horn,pyramidal horn and conical horn.

Gain of the pyramidal horn is summarized below.
G = (4 Pi K A)/λ2
K is about 0.5 to 0.6 depends upon how phase/amplitude of EM fields are displaced across aperture.
A is the aperture of horn in meter2
λ is the wavelength in meters

Hor. beamwidth of the pyramidal horn is summarized below.
B = 80 /(w/λ)
B is the beam width in degrees
w is width of the horn antenna
λ wavelength 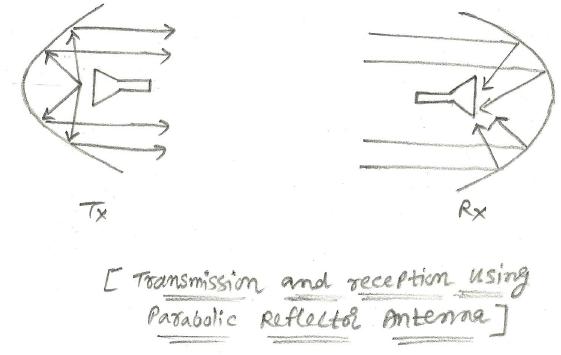 Aperture of the parabola antenna is the area of outer circle of the parabola.
The area A = 3.14 R2
Gain G = 6 (D/λ)2
D is the diameter of dish antenna and λ is the wavelength

As the name suggests helical antenna is made of coil surrounding the insulating support. Diameter of the wire is about 1/3 of wavelength and spacing between turns is about 1/4 of wavelength. About 6-8 turns are usually used in this type of antenna. Ground plane reflector behind helix of shape circular or square is used. This antenna is widely used in VHF/UHF range.

Gain and beamwidth of this helical antenna is about 12-20 dB and 12-45 degree respectively.

It is formed by cutting the metal sheet or waveguide about half wavelength in size. Due to this cutting of the slot it is known as slot antenna. Several slots can also be cut to form slot antenna array. Array antenna usually will have better gain and directivity compare to single slot antenna.

Slot antennas are widely used in high speed aircraft by filling the slot with insulating material to create smooth surface. Other external antennas will not be convenient to use at such high speed of the aircraft.

They are made of polystyrene or using plastic or other dielectric materials. These lens antennas are used for millimeter wave frequency above 40 GHz. In this kind of antenna dielectric lens is placed over end of the horn antenna which focuses waves into narrower beam. This results in greater gain as well as directivity. 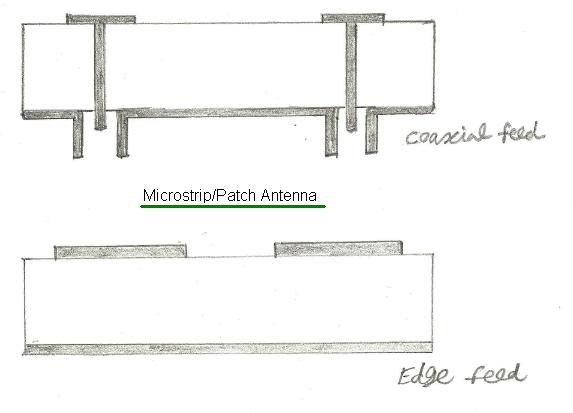 This antenna type is made with microstrip based design on PCB.Hence it is called as microstrip patch antenna. This antenna is basically circular or rectangular area of copper separated by conducting ground plane. Between this there will be insulating surface. In the case of rectangular antenna, width is approx. 1/2 of wavelength while in the case of circular antenna, diameter is approx. 0.55 to 0.59 of wavelength.

Phased array antenna is developed using multiple antennas on a common PCB or plane. The antennas used here are patch antennas or dipole antennas in a array. This combination of multiple antennas help improve gain as well as directivity. Individually all the antennas of the array are controlled and hence EM waves can be radiated in the different directions as desired. The same concept is applied in YAGI antenna and parabolic dish antenna used for TV reception. The other application of this type of antenna is radar/satellite based communication systems. 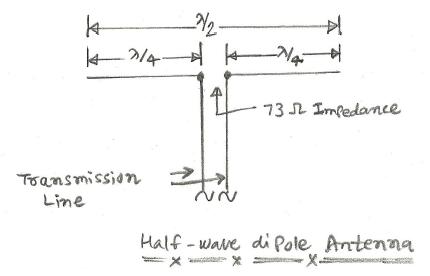 Antennas radiate effectively when length of antenna is directly related to transmitted signal wavelength.Dipole antennas are available in half wave or quarter wavelength in sizes. Half wave dipole antenna called as doublet will have length equal to 1/2 of wavelength of operating frequency. Usually RG-59/U is used for 73 Ohm coax line and RG-11/U is used for 75 Ohm line.

Length of this dipole, L = 468/Freq
The shape of radiation pattern of the half wave dipole antenna is like doughnut.

Antenna having omnidirectional radiation pattern transmit/receive in any direction. In order to send and receive in particular direction requires antenna with high directivity. This type of antenna having radiation pattern limited to narrow horizontal range is called directional antenna. In order to design this kind of antenna two or more antennas are combined which make an array. This increases gain and directivity. There are two array antenna types viz. parasitic arrays and driven arrays. 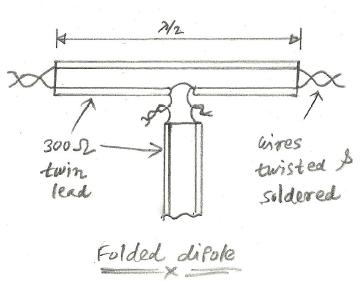 This is one of the popular type of antenna due to its 300 Ohm impedance. The folded dipole antenna is made of 300 Ohm twin lead having length equal to one half wavelength. Their ends are soldered. This is variation of the standard half wavelength dipole antenna. As shown in the figure, two parallel conductors are connected at the ends, with one side open at the center. This central open part is interfaced wih transmission line. Spacing between conductors is inverse proportional to frequency. For low frequency application, spacing is about 2 or 3 in. For high frequency application,spacing is about 1 in. 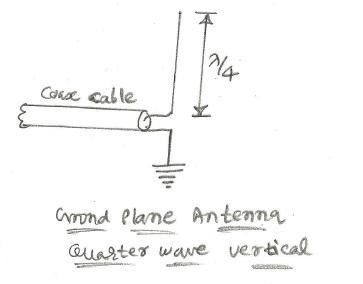 When vertical polarization and omni directional pattern is needed, ground plane antenna can also be replacement to standard half-wave dipole antenna. This antenna is fed with coaxial cable. It is formed by center conductor connected to the the vertical radiator and shield connected to the earth ground. This generates vertical omnidiractional radiation pattern.

YAGI antennas were widely used for TV reception, but as they are designed for one frequency only, they are not suited for wide frequency range. YAGI antennas are made of one driven element, one reflector and one or more directors. They are made with aluminium tubes and aluminium cross member. 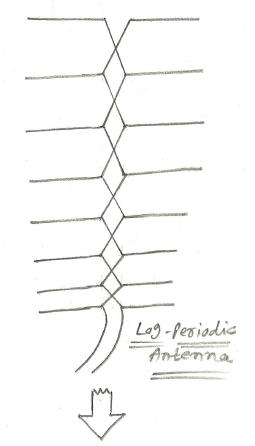 The benefit of this log periodic antenna is its wide bandwidth application. It is formed by different length driven elements. The longest and shortest elements are of half wavelength long at lowest and highest frequency of interest.

The elements of this log periodic antenna are fed with transmission line segments. The phases of the signals sent to different elements are properly set to achieve high directivity and the best gain.