Definition :
As we know voltage output of a single thermoelectric cell is very low, hence lots of such cells are arranged in series or parallel to obtain larger signal output. This arrangement of pile of thermocouples is known as thermopile. Other than pile of thermocouples, thermopile sensor uses infrared absorber plate as shown in the figure-1 below. 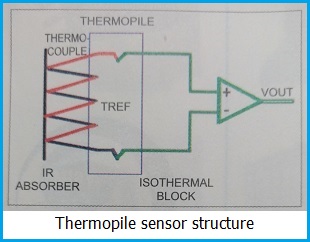 The voltage output of thermopile in response to temperature difference across the material is known as thermoelectric coefficient or seebeck coefficient. It is measured in volts per kelvin (V/K) or mV/K.

The thermopile sensors use infrared radiation for heat transfer and hence are used for non-contact temperature measurement. Due to this, it is used in infrared thermometers, industrial pyrometers, lifecare devices, temperature monitoring of moving objects etc. 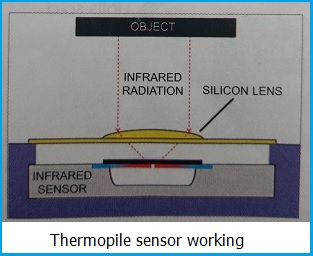 Let us understand working of thermopile infrared sensor.
➤A thermopile infrared (IR) sensor has mutiple thermocouples connected in series, which have "hot" junctions attached to very thin IR absorber. Absorber is usually a micro machined membrane on silicon chip.
➤Temperature of absorber rise or fall due to temperature difference between absorber and object. This depends on exchange of infrared radiation between object and absorber.
➤In order to measure temperature of the object, it should be ascertained that object will fill the sensor's field of view completely. This will make sure that infrared radiation is coming from the object of interest only and not from its background.
➤The use of filter and lens components will greatly enhances the performance of thermopile sensors as shown in the figure-2. Silicon is widely used as micro-machined lens. This is due to the fact that silicon is completely opaque to visible light but it is transparent to wavelengths longer than 2µm where most of the emissions occur for temperatures below 200oC (or 450oF).
➤Hence thermopile sensors are desigend to measure temperature of object (moving or fixed) from distance by detecting infrared energy emission of object.

Advantages and disadvantages of Thermopile sensor