As we know filters are used to remove unwanted frequency components from the signal. As we know digital data bits will look like as square wave in time domain, it will consist of more harmonic components. Due to this RF specification such as adjacent channel leakage ratio will not meet the requirement of the standard. Hence the said filters are needed in order to process basaband digital data informations before being coupled with RF part (i.e. RF Transceiver).

Using these filters, shape of the data bits will become smooth and hence harmonic contents will reduce to great extent.

The width of middle part is determined by Alpha. Alpha is a rool off factor which has value in the range from 0 to 1. Pass band of filter is defined by points between 50% of signal attenuation. 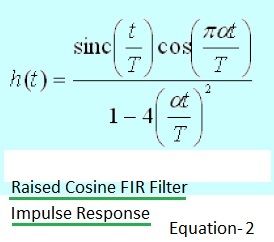 There are different typesof filters such as IIR filter, Analog filter and FIR filter. FIR filters are easy to implement and best to use. Refer FIR filter vs IIR filter for difference between FIR and IIR filters. The equation-2 helps to realise Raised Cosine FIR filter impulse response.

Higher order of filters will realize better raised cosine shape, but this results into longer delay.

The equation-3 is used to realise impulse response of root raised cosine filter. The frequency response has been plotted and shown in following figure-2. 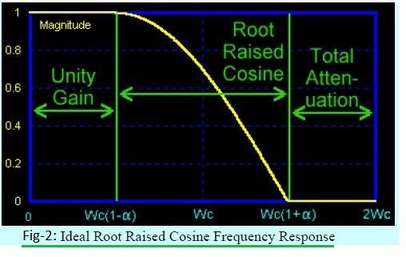 As shown the response is almost same as figure-1. But it will have more steeper response in the middle and it follows square root of the function mentioned in equation-1.