Difference between LAN MAN and WAN | LAN vs MAN vs WAN 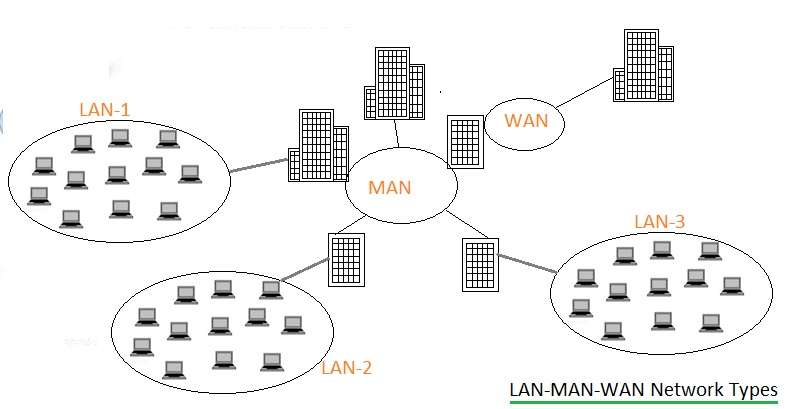 LAN has smaller coverage range within the house or office premises or can at least connect from one building to the nearby building. Most of the LANs usually will have about 10 to 100 users. Multiple users in LAN time share the system. LAN has been developed to allow sharing of common resource such as printer,harddisk and modem to more than one PCs. In this scenario PC connected with common resource is called as controller through which all the users will access the resource. As the days evolve people started using LAN for e-mail system for corporate network, here one system is configured as server storing mail boxes of all the users.

Latest advancement in the LAN technology supports data rates which range from 10 Mbps, 100 Mbps till 1Gbps. LAN is designed initially as per 802 standards, later various wireless standards are evolved such as IEEE 802.11a, 11b, 11g and 11n. Currently research is to finalize products supporting IEEE 802.11ac and 802.11ad supporting very high data rates.

CAN stands for Campus Area Network. It is network composed of multiple inter-connected LAN in limited coverage area. CAN network type is smaller in comparison with MAN and WAN as described below.

Examples of CAN based network:
• SUNet network of Stanford University
• Project Athena of MIT

It has following benefits:
• It is cost effective.
• It enables multi-department network access
• It supports single and shared data transfer

MAN occupies coverage in between LANs and WANs. MAN has distance coverage and data rate higher than LAN, but less than WAN. This is the major difference between LAN and MAN. MAN overlaps to some extent to geographical coverage requirement of WAN. A typical example of MAN is Local Cable TV system. Here cable TV company picks up programs from satellite and delivers to individual homes via coaxial cable. Each home is a node in this network of nodes.

Following table compares LAN vs MAN vs WAN with respect to various networking parameters and mentions difference between LAN MAN and WAN in tabular form.

FTP vs HTTP  FTP vs SMTP  FTP vs TFTP  hub Vs. switch  TCP vs UDP